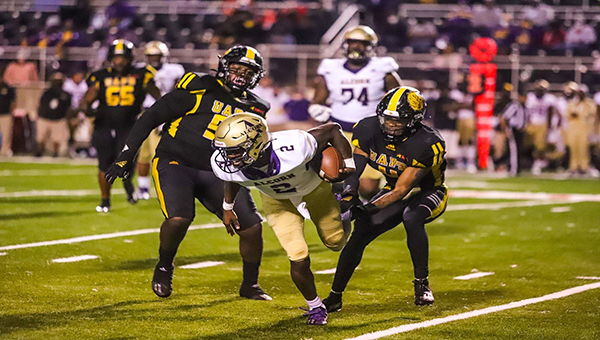 PINE BLUFF, Ark. — With their backs against the wall and a key early-season game seemingly slipping away, the Alcorn State Braves showed why they’re still the team to beat in the Southwestern Athletic Conference.

Niko Duffey ran for 142 yards and two touchdowns, including the game-winner with 3:01 remaining in the fourth quarter, and Alcorn State staged a remarkable second-half comeback to beat Arkansas-Pine Bluff 39-38 on Thursday.

Alcorn trailed 32-13 with 5:37 left in the third quarter after Tyquan Fleming returned a blocked punt for a touchdown. Alcorn also trailed by 19 points at halftime.

The Braves (2-2, 1-0 SWAC) scored two touchdowns in 3 1/2 minutes, however, to cut it to 32-26 going into the fourth quarter. Felix Harper threw a 60-yard TD pass to LeCharles Pringle and then ran 11 yards for another score.

Arkansas-Pine Bluff (1-2, 0-1) pushed the lead back to two scores on a 2-yard run by Kierre Crossley on the first play of the fourth quarter, but a two-point conversion attempt failed and left the score at 38-26.

Alcorn cut the deficit back to one score on a 69-yard touchdown pass from Harper to C.J. Bolar, and then took the lead with a nine-play scoring drive that bled almost five minutes off the clock.

Duffey carried the ball four times on the winning drive, including the last play when he was hit at the 1-yard line and stretched the ball across the goal line as he powered forward. The touchdown put Alcorn ahead 39-38 — a two-point try failed — and the defense came up with a stop on UAPB’s last possession.

On its three possessions following Crossley’s touchdown, UAPB had two three-and-outs and a turnover on downs. Its final drive reached midfield before an illegal block penalty forced third-and-25 from the UAPB 34-yard line. The Lions got most of the yardage back with a completion on third down, but quarterback Skyler Perry threw into double coverage on fourth down and the pass was broken up.

Perry finished 23-of-38 passing for 316 yards and a touchdown. Crossley had 44 rushing yards and two touchdowns.

For Alcorn, Harper completed 16 of 32 passes for 368 yards and three touchdowns, while adding another TD on the ground. Harper had 15 rushing attempts but was sacked six times and finished with minus-4 yards. He also threw an interception that was returned for a touchdown in the first quarter.

Bolar caught five passes for 151 yards and a TD for the Braves, and Pringle had four recpetions for 126 yards and two touchdowns.

Alcorn, which won six consecutive SWAC East Division championships from 2014-19, was playing its first game as a member of the West Division following the league’s recent expansion and realignment. It will have a bye week next week, and then host Grambling on Oct. 9 in another key division game.