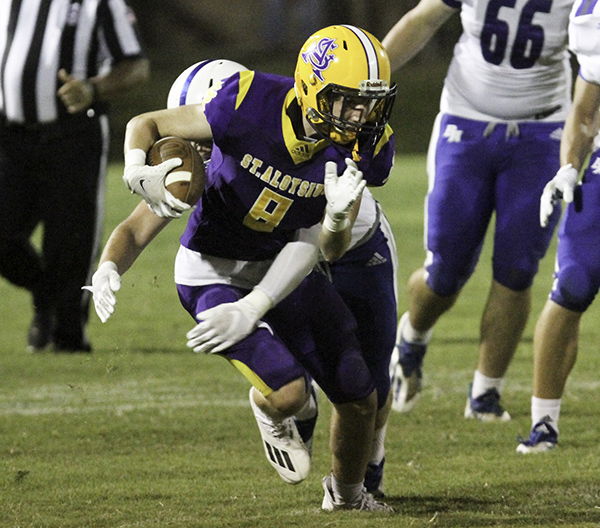 Summer officially turned to fall this week, and for St. Aloysius’ football team the goals they harbored in August are beginning to change as well.

Despite consistently strong efforts, an 0-5 start has tempered dreams of a championship season. Even the playoffs are becoming an increasingly distant possibility. At the halfway point of the season, a simple victory or two would be reason to celebrate, and that’s the goal this week.

St. Al (0-5) will host Cathedral (3-2) on Friday night wanting to win not only to claim bragging rights in their long-running Catholic school rivalry, but to have some tangible success to show for their effort to this point.

“There’s nothing more, in terms of my professional career right now, that I want more than a victory for these kids,” St. Al coach Bubba Nettles said. “I don’t want it for myself. I want it for them, I want it for these seniors. They deserve it. But we’re running out of games for that to happen.”

Nettles is still positive and optimistic about the future of the program, even if this season has started to slip away.

The Flashes have had the lead in three of their games and opportunities to win all of them. Even in a 35-6 loss to Adams County Christian last week, several early turnovers provided chances to score that St. Al was unable to take advantage of.

“I’m still as positive as I was the day I got the job because I can see past my nose. I can see that the future is bright,” Nettles said. “I have preached to these seniors since day one that no matter what happens this season, everything that occurs after that you helped build.”

Facing Cathedral could provide a spark for St. Al. This is the 60th meeting between the teams since the series began in 1938, and they’ve played each other every year since 1983.

Last year’s game in Natchez went into the record books as an 18-0 Cathedral win, but the Green Wave was actually ahead 35-7 in the second quarter when the game was halted and eventually canceled because of a heavy thunderstorm. The 18-0 score is the one the MAIS assigns to forfeits.

“They were pouring it on us before the Good Lord poured it on us. I’ve never been more grateful for a hurricane or whatever that was to go right through the middle of Natchez and put everybody home,” laughed Nettles, who was a St. Al assistant in 2020 before becoming head coach this year.

St. Al is hoping for a showing more like the ones they had against Cathedral in 2018 and 2019, when they recorded back-to-back lopsided victories. Even without a win to their credit, the Flashes seem capable of pulling it off.

Prior to their loss to ACCS, the Flashes had lost two consecutive games by a total of 13 points. The defense has given up 35 points per game, but the offense averaged 25 points in its first four outings. Rather than a string of blowouts, it was a handful of key plays that turned potential wins into losses.

“The world is noticing, in MAIS, that we are on our way to no longer being a pushover. That’s big for them to learn,” Nettles said.

Playing a big rival, Nettles added, could help push the Flashes over the hump and into the win column at last.

“It’s a rivalry game. At home. We’re pumped up and ready to finally get in that win column. They’re a very good football team, so we are certainly not trying to overlook them — we’re not in the position to overlook anybody at 0-5 — but the kids are focused and ready to go. I’m hoping we have one of our best weeks of practice yet.”