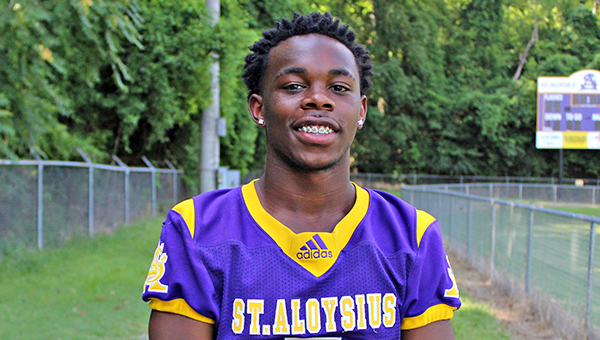 St. Aloysius running back Padre Gray rushed for 222 yards and a touchdown on 30 carries to lead the Flashes to their first win of the season on Friday, 28-27 vs. Cathedral.

It took six weeks, plenty of frustration, and one wild finish, but the St. Aloysius Flashes finally walked off the field a winner on Friday night.

Damien Reeves scored the go-ahead touchdown on a 3-yard run early in the fourth quarter, and St. Al used a blocked PAT and a fortuitous penalty to beat Cathedral 28-27 for its first win of the season.

St. Al (1-5) had lost its first five games, including three in which it held a lead in the second half. Bubba Nettles also earned his first victory as a head coach.

“It feels fantastic. I’m so proud of these kids. My heart beats for them. It’s great for myself, but these kids have worked their tails off,” Nettles said. “For them to stick with it, and see that they’re a good football team and they just had to put it all together. And we finally — finally! — put two halves of football together and beat a really good football team.”

Padre Gray carried the ball 30 times for 222 yards and one touchdown for the Flashes, while Tristan Wilbanks ran for one touchdown pass and threw for another to Carson Smith. Jack Gannon led the defense with a dozen tackles.

The game entered the fourth quarter tied at 21, and Reeves’ short touchdown and the PAT by Cooper Madison put the Flashes ahead 28-21 with seven minutes left. Cathedral scored with four minutes to go, but Chase Tucker blocked the PAT attempt to keep St. Al in the lead.

The Flashes missed a field goal on their ensuing possession, giving Cathedral one last chance. With less than a minute to go, the Wave completed what appeared to be a long touchdown pass, but they were called for offensive pass interference. They wound up turning it over on downs, and Wilbanks took a knee to run out the clock.

“I feel like I lost 20 years of my life tonight, but it was worth it,” Nettles laughed.

St. Al snapped a seven-game losing streak that stretched back to last season, and beat Cathedral for the third time in four years. More importantly, it finally had something positive to show for a half-season of solid effort that kept coming up agonizingly short.

In addition to his players, Nettles credited his assistant coaches and the home crowd for keeping the team inspired.

“It was huge. Absolutely huge,” Nettles said. “The home crowd, our student section, the fans, they were the difference maker. They were so loud we couldn’t signal plays and they couldn’t call their plays in. The crowd was huge tonight.”

St. Al will play Clinton Christian next week for homecoming.