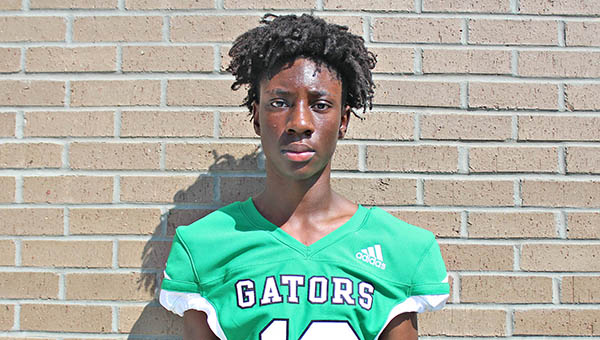 Vicksburg High wide receiver Tyler Henderson caught a touchdown pass for the second game in a row as the Gators defeated Jim Hill 54-0 on homecoming on Friday.

The Vicksburg Gators aren’t heading toward uncharted territory. Just places no one on the current roster has ever been.

A half-dozen players scored touchdowns, and the Gators hammered Jim Hill 54-0 for a homecoming victory on Friday. It was their third consecutive shutout and moved their MHSAA Region 2-5A record to 3-0. The last time they accomplished those feats was in 2008 and 2003, respectively.

The Gators (3-2, 3-0 Region 2-5A) also remained in first place in the region and surpassed last year’s win total. One more would give them their best total since 2017.

“I keep reflecting on last year, and where we’ve come from last year to this point I’m just elated that these kids continue to get better,” said Todd McDaniel, who is in his second season as Vicksburg’s head coach. “They’re coming together more and more every day. They’re better teammates to one another. The culture we’re trying to build is going to be here a long time. I’m happy about that.”

Running backs Malik Montgomery, Johnny Smith, Collin Johnson, Jamichael Adams and Otis James all scored rushing touchdowns, and receiver Tyler Henderson caught a touchdown pass from Ronnie Alexander. It’s the second game in a row that Henderson and Alexander have hooked up for a scoring pass.

VHS led 40-0 at halftime, and it could have been worse. Three touchdowns were negated by penalties.

“We played pretty well. We’ve got to clean those things up and come out to work every day, and make sure we’re doing everything possible to get better,” McDaniel said. “We’ve got to keep everything crisp and be physical at the point of attack. I can’t wait for practice Monday to work on the things we had mistakes with.”

Vicksburg’s defense, meanwhile, ran its shutout streak to 14 quarters. It has not allowed a point since Warren Central scored a touchdown late in the first quarter of their Week 2 matchup.

They’ll try to keep it rolling next week at Provine. McDaniel said he’s happy with how his team is taking care of business.

“It was really good to see for the guys to just go at them,” he said. “We knew Jim Hill was struggling a little bit, but we told the kids that’s not our fault, so let’s go out and do the things necessary for us to win. That’s what we’re building toward. We want to make sure we get better, regardless of who the opponent is.”