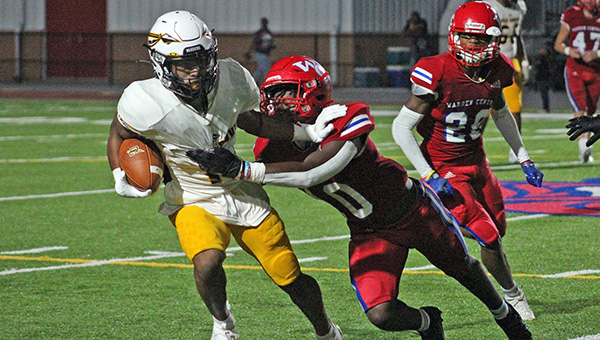 Kabe Barnett completed 20 of 28 passes for 235 yards and a touchdown, and added a rushing TD in the fourth quarter as defending MHSAA Class 6A champion Oak Grove pulled away from Warren Central to win 37-20 on Friday.

Oak Grove scored 21 points in a 6 1/2-minute span of the third and fourth quarters to turn a competitive game into a blowout.

“We knew coming in that they were potent and dangerous. I thought we did well, and I thought they did well,” Warren Central coach Josh Morgan said. “Offensively, we weren’t able to establish first downs and drives and get any momentum. We weren’t even on the field hardly, it seemed like, the first half and we can’t hang with Oak Grove if we’re not able to do that. And we couldn’t get them off the field the first half.”

Warren Central (3-1, 0-1 Region 3-6A) was running uphill all night, but managed to stay in it until the fourth quarter.

The Vikings scored their first points on a 4-yard touchdown run by Mark Gray to cut it to 16-6 with 3:36 left in the third quarter. Oak Grove answered right back, however, with a six-play scoring drive capped by an 18-yard run by Dontavious Howard two minutes later.

It was the start of a disastrous sequence for the Vikings that sent the game spiraling out of control.

WC went three-and-out on its next possession, and Riley Lampkin’s punt only went 14 yards to the 24-yard line. Oak Grove cashed in on the short field and scored on a 1-yard run by A.J. Maddox.

Jack Wright threw an interception on Warren Central’s next offensive snap, and Oak Grove again took advantage. Jaquerrius Gray carried three straight times to move the ball from the 38-yard line to the one, and Barnett took it in from there to make it 37-6 with 7:26 left in the game.

“You get two possessions inside the 20 and I don’t care who you are, it’s tough to stop any offense that can play. Our guys did a great job of executing right there, and I’m really proud of them,” Oak Grove coach Drew Causey said.

Warren Central collected itself enough to score twice late and make the final a little more respectable. Wright threw a 40-yard touchdown pass to Trey Hall, and then a 43-yard pass to Jaylon Trisby to set up a 2-yard TD run by Hall.

That cut it to 37-20 with 1:59 remaining, but the deficit was too much to do more than carry a smidgen of momentum into next week’s road game at Brandon.

Wright finished the game 7-of-9 passing for 178 yards, with one touchdown. Among his seven completions were ones that covered 52, 30, 40 and 43 yards, all in the second half.

Howard finished with 66 rushing yards and two touchdowns for Oak Grove (3-1, 1-0) and Tyrell Pollard caught 10 passes for 123 yards and one touchdown.

“We just didn’t have anything go our way, it felt like. They had a lot to do with that. But we didn’t have many breaks go our way at all and we didn’t help ourselves that much,” Morgan said.