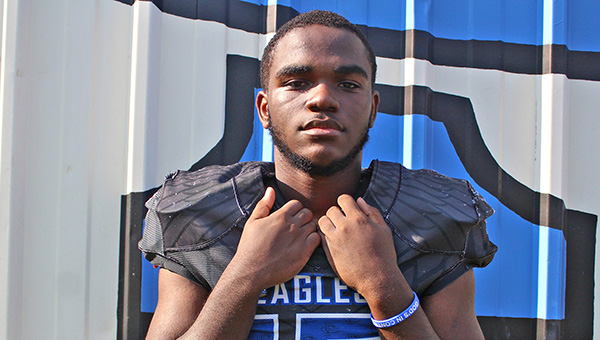 Porter's Chapel Academy running back Tyler Washington carried the ball 28 times for 250 yards and four touchdowns in a 52-27 win over Wilkinson County Christian on Friday.

Porter’s Chapel Academy learned Friday night that if you find something you like, it’s sometimes best just to stick with it.

Senior Tyler Washington carried the ball 28 times for 250 yards and four touchdowns, and added a pair of two-point conversion runs, to lead PCA to a 52-27 victory over previously unbeaten Wilkinson County Christian.

PCA coach Blake Purvis said not only did he feed the ball to his star running back, he did it without changing the play call.

“Tyler Washington played an absolute man among boys game at running back tonight,” Purvis said. “On those 28 carries, it was the exact same play 28 times. There was nothing fancy about it. He ran straight downhill all night long on the same play.”

Porter’s Chapel finished with 356 rushing yards as a team. Quarterback Jace Riggs carried the ball 13 times for 68 yards, while Taylor LaBarre and Jase Jung each had a rushing touchdown.

Riggs completed 8 of 12 passes for 83 yards, including a 12-yard touchdown to Willie Rogers in the first half. Rogers caught five passes for 54 yards, to go along with an interception on defense.

The stars of the game, though, were Washington and the offensive line that paved the way for his big night. With Bridges Williams, Conley Johnston, Maureon Simms and tight end John Wyatt Massey blowing open holes, the Eagles were able to feed the ball to Washington until he wore down Wilkinson County Christian’s defense.

Washington scored three of his four touchdowns in the second half, and two in the fourth quarter.

“Our offensive line played they best game they’ve played all year. We ran behind Maureon, and John Wyatt at tight end, and Bridges and Conley just pounded them all night,” Purvis said. “We just stuck to what we were doing. We played disciplined ball and didn’t make mistakes that killed us.”

PCA (4-2) won back-to-back games for the first time this season, and earned a signature win against a quality Class 1A opponent. Wilkinson County Christian (5-1) lost for just the third time in its last 20 games.

“It was huge for us,” Purvis said. “The winning streak is big. Beating a good opponent and getting that quality win helps validate the process. We just have to stay with it.”