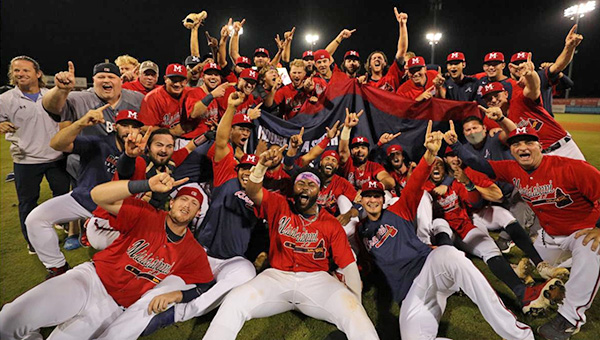 PEARL — Trustmark Park is, once again, the home of champions.

The M-Braves claimed their second league championship since moving to Pearl 16 years ago, adding the 2021 Double-A South trophy to the 2008 Southern League trophy.

The M-Braves recorded the best winning percentage in club history (.604) by finishing 67-44 during the regular season. They won the regular-season Double-A South championship by eight games over the Biscuits, and then went the limit with them in the championship series.

After Montgomery scored in the top of the second inning, the M-Braves tied it in the bottom half when Shea Langeliers walked and scored on a double by C.J. Alexander.

In the sixth inning, Greyson Jenista hit a solo home run for what turned out to be the game-winning run. The homer was Jenista’s third of the championship series and 22nd of the season. Overall, the M-Braves hit seven home runs during the five-game series.

The 24-year-old Rangel turned in a brilliant start, allowing one run and striking out eight through six innings. It was his first postseason start and first outing in 11 days.

Rangel gave up a leadoff single to Xavier Edwards in the third inning, then struck out the side and retired 12 batters in a row before handing the ball to the bullpen.

White and Higginbotham pitched a perfect seventh and eighth inning, respectively, and Kingham got the first two outs in the ninth before running into — and then escaping from — trouble.

Ruben Cardenas singled to end the string of 20 consecutive outs, and moved to second base on a passed ball. Finally, Kingham got Cal Stevenson to hit a foul pop up that the third baseman Alexander caught for the final out.