Four Down Territory: Washington has a big night, while Gators’ defense stays stingy 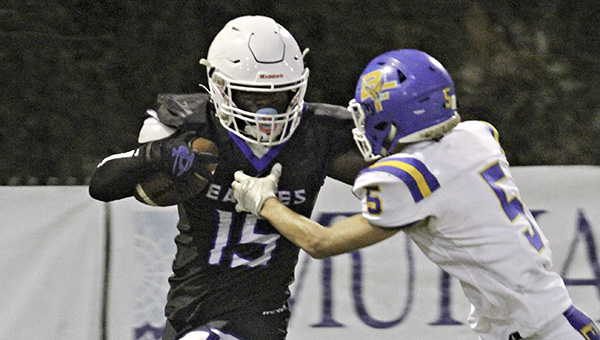 Porter's Chapel Academy running back Tyler Washington tries to fight off a Ben's Ford defender earlier this season. Washington has averaged 9.7 yards and scored 10 touchdowns on only 63 carries this season. (Paul Ingram/For The Vicksburg Post)

1
Earlier this season, Tyler Washington seemed like one of the the most underused running backs in Mississippi.
No longer.

The Porter’s Chapel Academy senior carried the ball 28 times for a career-high 250 yards and four touchdowns as the Eagles beat Wilkinson County Christian 52-27. He’d only had 35 carries in PCA’s first five games combined.

PCA coach Blake Purvis said circumstances limited Washington’s workload in the first half of the season. Either the team built big early leads and didn’t need him, or the game plan was to use him in other ways.

Despite that, Washington has maintained an unselfish attitude that has contributed to PCA’s 4-2 start and put it in position to end a seven-year playoff drought.

“That’s been the big thing with Tyler, is he’s not been disgruntled. I was more disgruntled because I’ve got this guy and I’ve only given him the ball 11 times,” Purvis said. “He’s playing as unselfishly as he’s ever played. He wants to win. It doesn’t matter if it’s him carrying it 28 times, or him carrying it three.”

A four-year starter, Washington has led PCA in rushing each of the past three seasons and earned a place of honor in the school’s football history.

Earl Johnson is the school’s career leader in both categories, with 4,079 yards and 39 touchdowns from 1974-76. Those marks are probably out of reach for Washington with only half a season left, but he is certainly carving a legend that will be remembered at PCA for a long time to come.

“As far as numbers are concerned, there’s no doubt he’s the most successful player over an extended period of time that I’ve ever coached,” Purvis said. “The majority of his numbers came in 11-man, and came when he was a lot of times all we had. When we were struggling up front, or struggling offensively, he was still able to find success. To me, that speaks volumes for him putting up those career numbers. He hasn’t been on super successful teams that just blow people out. He’s had to work for those yards, and he’s earned those yards.”

2
Vicksburg High’s last playoff victory came in 2008. Its defense is continuing to do a lot of things it hasn’t done since then as well.

The Gators crushed Jim Hill 54-0 on Friday for their third consecutive shutout, marking the first time they’ve done that since blanking Lanier, Canton and Ridgeland in the final three games of the 2008 regular season.

“When you break down film of the previous years, you see a lot of things that we weren’t doing. So we’re coming in and teaching the fundamentals of the game and lining up correctly. That’s 50 percent of it,” Vicksburg coach Todd McDaniel said.

The last time Vicksburg had four shutouts in a row was in 1973, when it blanked five consecutive opponents and allowed one touchdown in its first nine games en route to the Big 8 Conference championship — the equivalent of a Class 5A or 6A state title today.

McDaniel wasn’t sure how long the 2021 Gators can keep their shutout streak going. He’s more concerned with maintaining their winning streak.

“We haven’t even thought about it. We just go to work, watching film and breaking it down, and the kids are continuing to hone in on what we do,” McDaniel said. “And if they do score? It’s football. They’re coached too. That’s just part of it. We have to go to the sideline to regroup. But we just have to play football.”

3
Baltimore Ravens kicker Justin Tucker set an NFL record on Sunday by making a 66-yard field goal on the final play of a 19-17 victory against the Detroit Lions.

Tucker’s kick hit the crossbar, then bounced high in the air and backward into the kicking net. It was the 22nd field goal in NFL history of 60 yards or longer — Tucker also had a 61-yard game-winner against Detroit in 2013 — and bettered by two yards the record Matt Prater had held since December 2013.

Coincidentally, Prater attempted a field goal on Sunday that would also have set the NFL record. He tried a 68-yarder at the end of the first half of the Arizona Cardinals’ game against Jacksonville, but it fell just short and was returned 109 yards for a touchdown by the Jaguars’ Jamal Agnew.

Agnew’s return tied an NFL record for the longest touchdown in league history. The Cardinals went on to win the game, however, 31-19.

4
Southern Miss wound up on the wrong side of a historic performance Saturday night against Alabama.

Alabama junior Jameson Williams returned the opening kickoff 100 yards for a touchdown, and added an 83-yard kickoff return TD in the fourth quarter. In doing so, he became the first player in the Crimson Tide’s storied history to return two kickoffs for touchdowns in one game.

Williams also caught an 81-yard touchdown pass in the second quarter to finish with 258 all-purpose yards and three touchdowns on only four touches. Williams lost six yards on a second-quarter kickoff return.

Alabama beat Southern Miss 63-14 to close in on another record as well. It was the 30th consecutive game in which the Crimson Tide have scored 30 points or more. The FBS record is 31 consecutive games, set by Central Florida from 2017-19.