Attic Gallery patron reflects on shows and a lifetime of art 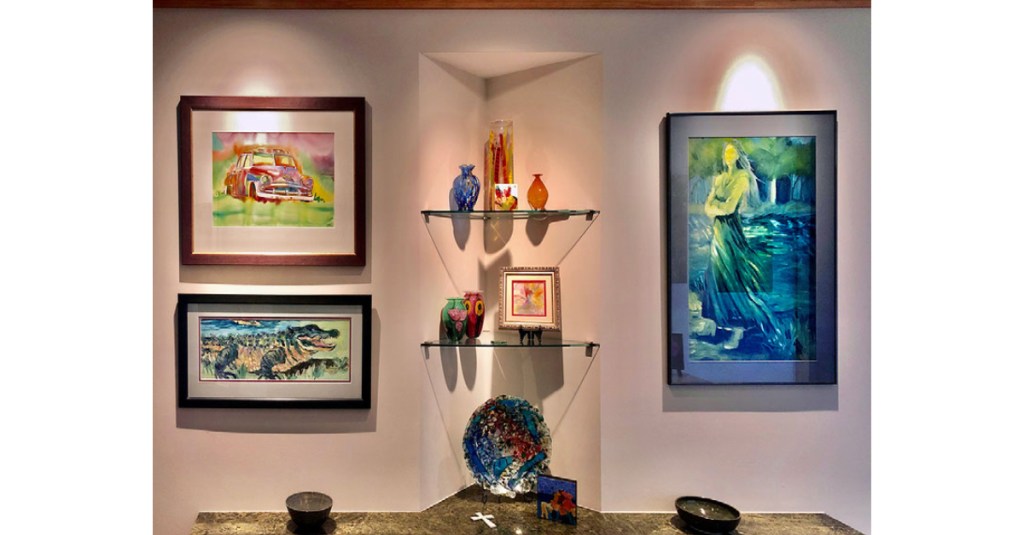 A wall in Paul and Donna Ingram's home showcases some of the more than 50 pieces of art they have collected from The Attic Gallery. This Saturday, an art showing will be held at the gallery to celebrate its 50th anniversary. (Photo Submitted)

Editor’s note: This story is part of The Vicksburg Post’s ongoing coverage of the Attic Gallery’s 50th-anniversary celebration.

When Lesley Silver moved her art gallery just three blocks down Washington Street in 1997, Vicksburg residents Paul and Donna Ingram along with others in the community helped transport the art to its new location.

“She had a nude of Kathy Gergo’s and Paul prominently walked down Washington Street caring this large nude that Kathy had done,” Donna said.

This is typical of Paul’s buoyant personality, but it also reflects the love and appreciation both he and Donna share as ardent supporters of the Attic Gallery and its owner.

“Lesley is a treasure, and she has done so much for the art community,” Donna said.

Located at 1101 Washington St. above the Highway 61 Coffeehouse, the Attic Gallery is a one-of-a-kind art experience. Even as you climb the steps to its second-floor home, art pieces hang on the wall giving one a taste of what’s to come.

“We love it. The Attic Gallery is a treasure. Every time you go in there you find something that you haven’t seen before or an artist you have not noticed because they (paintings) are buried amongst all the art that is stacked up on counters and on the floor and on the wall,” Donna said.

Not counting the jewelry and gifts the couple have purchased, Donna said, they have collected more than 50 pieces of artwork from the Attic Gallery, some of which were purchased during art shows.

These showings are held above the gallery in Silver and her husband, Daniel Boone’s home.

Paul, who is an architect, helped with designing the couple’s third-floor living space, Donna said, which is capable of being transformed into a gallery itself with its picture rails throughout.

Donna describes the art shows held in Silver and Boone’s home as impactful because not only can one view the art, but patrons can also meet some of the artists.

“The intimate setting that Lesley is able to create at her shows with the artists mingling with the patrons is what I think makes that event so special. You have them (the artists) telling the story that went into creating the art. And it’s the stories that make the art so interesting to us,” Donna said. “Plus, you get to meet other collectors.”

With art pieces varying from folk art to abstracts to realism, to everything in between, Donna said, the Attic Gallery has a little bit of everything.

The variety also allows for varying price points so anyone can become a collector.

“She (Lesley) wants to get art in the hands of people,” Donna said.