Looking Back: Fire Station No. 7 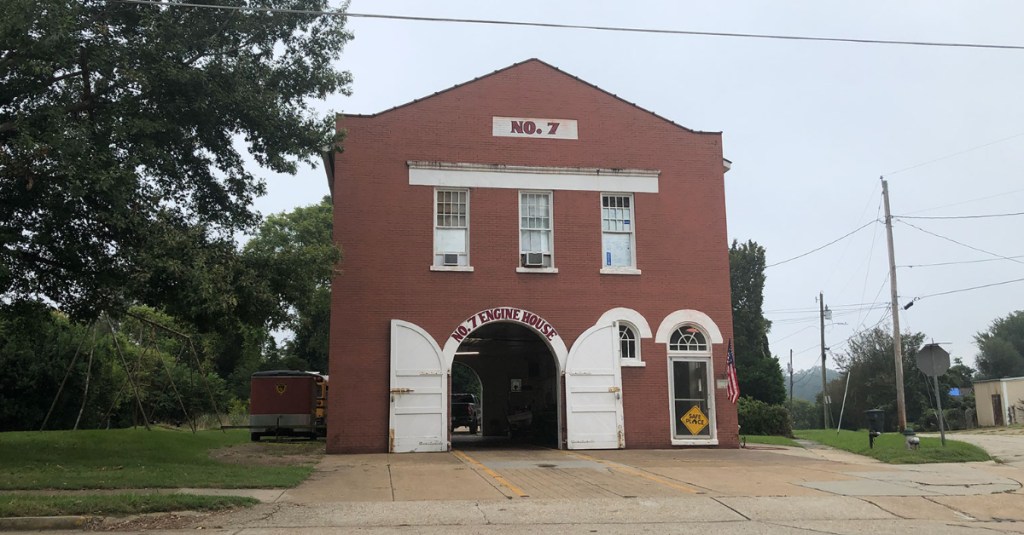 Built in 1909, Fire Station No. 7 continues to be used as a firehouse today. (Photo Submitted)

In March 1909, architect William Stanton, Jr. started drawing plans for a new fire station to be located in Speed’s Addition, the city’s fifth ward at the time.

Stanton and fire chief Joe Wilks had visited stations in Jackson in order to gather information about how best to design the building. On June 8, the Vicksburg Herald reported that “the council was presented with a set of plans and specifications for the construction of a fire engine house in the fifth ward on South Washington Street. The council adopted the plans which are for a two-story brick truck house, and will advertise for bids.”

On June 26, the bids that were received ranged from $7,832 (for common brick, more for paving brick) by Richard B. Howard and $7,942 by H.H. Havis to $9,560 by E.W. Pendergraft and $9115 by Curphey and Mundy. An article in the Vicksburg American reported that Alderman Harding wanted to reject these bids as too high, but he lost on a vote of 6 to 3.

“The proposition to build a new firehouse according to plans and specifications proposed by Architect Stanton was discussed at great length. Alderman Barber started the ball rolling by saying he didn’t see the necessity of building a firehouse larger than the Constitution engine house. The plumbing in the proposed building would cost in the neighborhood of $1,500. He thought this might be cut down as he did not see the need of three shower baths and two commodes for three men.

“He thought one bathroom was enough for three firemen. He also thought plate glass piers in the bathrooms could be cut out. Alderman Miller said… that he now thought the proposed building was extravagant. He favored a good firehouse but thought other plans for a building could be drawn up which would not be so expensive.  He did not think the shower baths necessary.”

Harding stated that the city should try and get a cheaper plan for the building.

“He did not favor a cheap appearing house but favored one that would be a credit to the city. He was opposed to throwing money away and thought that a $6,500 house would fill the bill.”

The arguments continue on both sides with Alderman Helgason campaigning for the plans, stating that “he did not see why the building should not be larger than the Constitution house. To cut the building 10 feet would only save about $200.  The plans provided for a rack for drying hose. This was very desirable as it saved the hose.”

He was opposed to further delay in the matter and favored accepting the bid of Howard. As a compromise, the board voted to send the plans back to the fire committee to see if any modifications could be made. On July 8, new plans were submitted in which “certain luxuries as shower baths, lavatories, bathtubs, gas heaters, etc. had been cut out and that Contractor Howard had agreed to erect the building for $7,650.”

Aldermen Harding and Barber still thought that the price was too high, even though Helgason stated that the city had the money and that the 5th ward deserved a fine house. The “nays” lost the vote and the board voted to approve the construction of the house by Howard, with work immediately beginning.

A few days later, the board voted to pay Stanton two percent of the building price to oversee the construction, stating to the Vicksburg Evening Post that Stanton had prepared the plans for the building at no charge. On Dec. 2, 1909, the Vicksburg Herald reported that “Contractor Richard Howard states that the fine new brick fire department house in the fifth ward of this city, which he has been building for several months, will be completed the latter part of next week.  The city has already let the orders for equipping this house with an up-to-date chemical fire apparatus, which will be here sometime the early part of next year.”

Indeed, the house was completed on December 23, but would not be occupied until the fire equipment was in place which didn’t occur until March 1910. The building continues to be used as a firehouse today, outliving Constitution’s use as a firehouse by about 70 years.