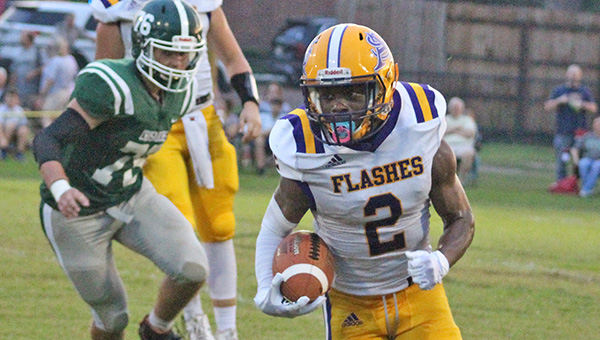 Part of the workout when St. Aloysius returned to practice on Monday was a quick weightlifting session. If you added up the totals on all of the iron plates in the team’s fieldhouse, however, it would not come close to equaling the weight they lifted last Friday night.

The Flashes upset Cathedral, 28-27, for their first win of the season. It was a welcome reward after five weeks of close calls and frustration, of solid efforts that ended with little to show for it.

“I cried like a baby. Obviously it was tears of joy for these kids, for these coaches that put the work in week after week of being so close and knowing how good these kids really are,” St. Al coach Bubba Nettles said. “They were just finding ways to lose. To finally see them put it all together, a perfect four quarters, two perfect halves, and beat a really good football team Friday night, it was a lot of stress that came off my shoulders.”

Now the Flashes (1-5, 0-2 MAIS District 3-4A) will wrap up a quick two-game homestand by facing Clinton Christian (3-4, 0-2) for homecoming. It’s a matchup with another team that has endured an uneven season, and a chance for a rare winning streak.

St. Al has not won consecutive games since closing the 2019 regular season with back-to-back victories against Washington School and Cathedral.

“I can assure you we’re not going into this week thinking we’re going to walk into here Friday and just mop the floor with these kids,” Nettles said. “They fight just like we do. They’re wanting a win, we’re wanting a win, it’s homecoming night so they’re going to be extra chippy that we scheduled them for homecoming, so I can assure you we are not overlooking them.”

One of the reasons for St. Al’s struggles the first half of the season was a difficult schedule. Only one opponent so far has had a losing record, and Clinton Christian is the only one of four remaining opponents that is below .500.

St. Al has held its own, though. Three of its six games have been decided by six points or less, and another went above that mark because of a throwaway touchdown late in the fourth quarter. Any piece of positive momentum, Nettles said, is something to seize upon.

“Morale-wise, (Sunday) in film everybody was here and they were much more willing to listen. They were like, for the past three weeks he’s said all this and bam, we finally did it all and look what happened,” Nettles said. “They’re extremely pumped up and excited. The texts and messages I’ve received from people in the community, parents of players and supporters of St. Al to keep encouraging me, the support here has been phenomenal.”

If the Flashes need some more inspiration to put together a strong finishing kick, they can look to recent history.
Since joining the MAIS in 2015, St. Al has an 11-34 record in regular-season games played in August and September. It is 14-6 in games played in October.

The MAIS uses a power points system to determine the bulk of its playoff brackets, so one or two more wins might be enough to put the Flashes into the postseason and make the early struggles a distant memory.