Gators go for another shutout against Provine 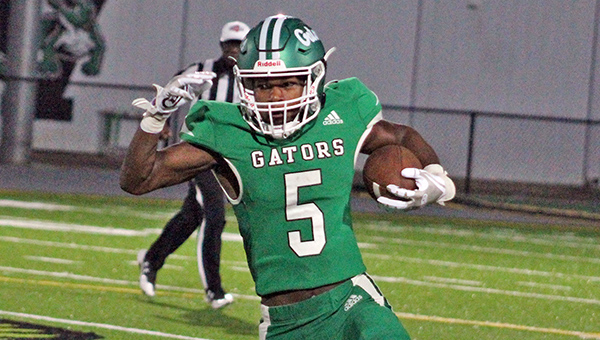 Vicksburg High running back Johnny Smith (5) carries the football Thursday against Forest Hill. The Gators will go on the road to play Provine on Friday. The game will be played at the South Jackson field, located at Forest Hill High School. (Ernest Bowker/The Vicksburg Post)

With three consecutive region victories in the books and dreams of playoff possibilities dancing in their heads, the biggest concern for Vicksburg High football coach Todd McDaniel is that his players watch what they eat.

“I sent out a text to them last night telling them don’t eat the rat poison,” McDaniel said, taking an often-used line from the playbook of Alabama coach Nick Saban about letting success go to your head.

“We’re doing well, but people telling us how well we’re doing is not the reason why we’re winning right now,” McDaniel added. “We’re winning from hard work, watching film, getting in the weight room and doing everything we’re supposed to do to be successful. Words can’t do it alone. It takes action.”

As they approach the halfway point of the season, the Gators (3-2, 3-0 MHSAA Region 2-5A) have been all action and no talk. They’ve outscored their three Region 2-5A opponents 145-0 and have not allowed a point in 14 quarters.
A win Friday at Provine (1-4, 0-3) would give them four wins in a season for the first time since 2017. They’ve only had a winning record once since 2008, and are fast closing in on achieving that milestone as well.

It’s a sudden rush of success that has the entire Vicksburg community thrilled, but as McDaniel pointed out it comes with its own perils. The Gators have thus far feasted on the bottom half of Region 2-5A — only Vicksburg, Ridgeland and Neshoba Central have winning records among the league’s nine teams — and the biggests tests won’t come for a few more weeks.

Neglecting to put in the work now, McDaniel said, will eventually show up down the line.

“When you run off the field at the end of the year there is only one team that’s truly happy. We’re trying to get the program to that point,” McDaniel said. “I’m happy the kids are having success, but as a coach I’m searching for perfection. It’s something we’ll probably never find as individuals, but we can find it as a team.”

The Gators will continue their quest for perfection — as well as keeping pace for the program’s first region title since 1990 — when they travel to face Provine on Friday. The game will be played at the South Jackson field, located at Forest Hill High School.

Like all of the other Jackson Public Schools, Provine did not play a season in 2020 because of COVID-19 concerns and has struggled early in 2021. McDaniel said the missed season is irrelevant at this point, however, with five games under the Rams’ belt.

“I think that’s pretty much over now. This is Week 6, really Week 7 because we had the jamboree. So they’re moving pretty fast now,” McDaniel said. “They’re athletic, big and strong. They have some great athletes on the perimeter, so our work is going to be cut out for us. We have to take our A-game in order to come back with the W.”

“They’re kicking behind,” McDaniel said. “I don’t care who you’re playing, if you shut three teams out and hold Warren Central to seven points in four weeks, that’s not by chance.”

And, it seems, the best might be still to come. The Gators only have two seniors starting on defense, and a young corps of players powering the offense as well. Six running backs — Otis James, Malik Montgomery, Johnny Smith, Alex Jefferson, JaMichael Adams and Collin Johnson — have split carries and contributed touchdowns this season. Of that group, Adams is the only senior and the rest are sophomores.

Johnson and Jefferson both went over 100 yards and scored touchdown last week against Jim Hill, as the Gators piled up 396 rushing yards as a team and won 54-0.

So, as the Gators appear to be turning a corner, there is plenty of fast, open road ahead of them — provided they don’t hit any speed bumps.

“We’re still working on the fundamentals. People have to understand we still have 10th-graders as the majority of our team and they’re still learning how to play football. We’re nowhere near a finished product,” McDaniel said. “We just have to continue to grind and continue to coach, and for the kids to continue to hone in and stay focused.”