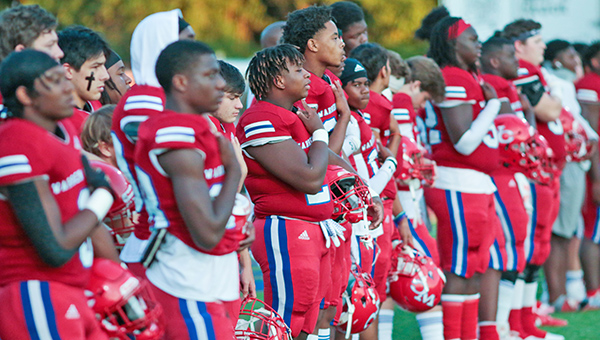 Warren Central football players stand for the national anthem before a game earlier this season. The Vikings will go on the road Friday to play Brandon. (Walter Frazier/For The Vicksburg Post)

Warren Central’s football team will add a little different wrinkle to its pregame routine this Friday.

The Vikings will load up and head 60 miles east on I-20 to face Brandon in a rare road trip. Thanks to scheduling quirks and forfeits caused by last year’s COVID pandemic, it’s only the second game the Vikings have played outside of Warren County since the start of the 2020 season.

Warren Central (3-1, 0-1 MHSAA Region 3-6A) has played two games away from Viking Stadium this season, but both were across town at Vicksburg High and in front of crowds that were at least evenly split. Playing in a truly hostile environment will be a new experience for a number of players, and one of many issues to address this week, coach Josh Morgan said.

“We’ll talk about that in our meetings and our practices. Brandon is a tough place to play. Their crowd gets into it, and they’ve got a really good football team,” Morgan said. “We’ve got to not only be able to play really good, but handle all that comes with being away in a tough environment.”

Another big issue is figuring out how to shake off their first loss of the season. Warren Central turned in what Morgan called a “disappointing” performance in a 37-20 loss to defending Class 6A champion Oak Grove last week.

The Vikings allowed two fourth-down conversions on a game-opening scoring drive, another touchdown just before halftime, and then three more touchdowns in a 6 1/2-minute span of the second half that allowed Oak Grove to blow the game open. The surge that spanned the third and fourth quarters took the score from 16-6 to 37-6.

“I was more disappointed because I just feel like we’re better and could have played better. We played a very good team, but we’re better than that and have to play better than that,” Morgan said. “That’ll be the challenge this week, is getting better and making sure we’re bringing our A-game from here on out because that’s what it’s going to take.”

The loss to Oak Grove put Warren Central in a tough spot just two weeks into its region schedule. Brandon (2-2, 1-0) is one of at least six playoff contenders in Region 3-6A. Going to 0-2 in the league, with losses to two of those contenders, would leave Warren Central with a lot of ground to make up in order to reach the postseason.

“It’s a business week, for sure,” Morgan said. “We very may well see two out of the three toughest teams right out of the gate. We have to be able to toe the mark and take on that challenge and approach it as a business week, because that’s what it is. It’s a very big game for us, as far as the district and playoff implications.”

Unlike most of its new rivals in Region 3-6A, Warren Central does have some history with Brandon. The teams split a pair of regular-season meetings in 2019 and 2020, and they played each other in their spring game for several years before that.

Morgan said it’s helped he and his staff become familiar with the Bulldogs’ personnel and coaching style. They’ve got a healthy respect for both.

Brandon slumped to a 5-6 record in 2020 — one of its losses was a 23-3 setback vs. WC — and missed the playoffs for the first time in 10 years, but have enough returning talent to be a formidable foe.

“They’re a good football team. They’ve played a tough schedule. They’re playing very good on both sides of the ball and they have a very talented football team,” Morgan said. “Most of their D-line is returning from last year, and that’s the strength of their defense. There are some very good, big, physical, experienced players up there.”