Defenses in spotlight, under pressure for Ole Miss-Alabama showdown 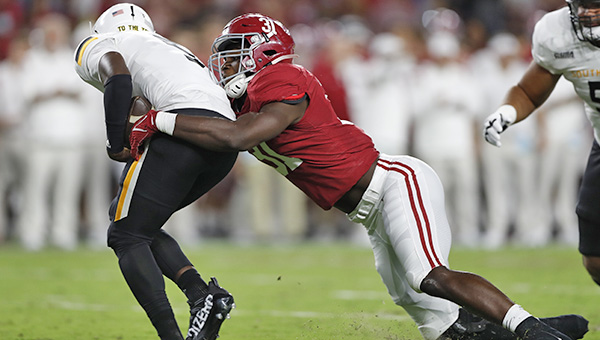 TUSCALOOSA, Ala. (AP) — The Alabama and Ole Miss defenses are aiming to show they’ve come a long way from last year’s offensive extravaganza.

The Crimson Tide and Ole Miss combined for 111 points, 1,370 yards and 68 first downs last season. That 63-48 win for Alabama was fun for the offenses, but a bitter memory for those on the other side of the ball.

It left both defenses eager to show they’re improved heading into Saturday’s rematch between the top-ranked Tide and No. 11 Rebels at Bryant-Denny Stadium.

“I know that we could have won the game if the defense got a couple of stops,” Ole Miss linebacker Lakia Henry said. “It was a defensive loss, that’s how I look at it. We have to get stops.”

At least one of the defenses needs to get stops in a game featuring Heisman candidates at quarterback — Ole Miss’s Matt Corral and Alabama’s Bryce Young.

Defensive end Sam Williams, who took advantage of the extra year of eligibility from the pandemic, leads the Southeastern Conference and ranks seventh nationally in sacks per game with four in three outings and has a fumble recovery for a touchdown.

Alabama didn’t need as much immediate help but added Tennessee transfer Henry To’oTo’o at middle linebacker and he’s leading the team in tackles. The defense is led by outside linebacker Will Anderson Jr., who has 8.5 tackles for loss and two sacks.

Statistically, the Rebels have improved after ranking 126th nationally in total defense last season. Now, they’re a more respectable 59th, allowing one fewer point in the first three games than they allowed to the Tide in 2020.
But the Rebels haven’t proved it against a team like Alabama, which also hasn’t faced such a prolific offense.

The Tide’s biggest test came in a 31-29 win over No. 10 Florida and the defense looked more vulnerable in the second half of that game, especially.

But it was nothing like that 2020 shootout with Ole Miss. To’oTo’o wasn’t around then but knows it’s on the mind of his new teammates.

“Definitely they harp on it,” To’oTo’o said. “It wasn’t the game they wanted, it wasn’t the kind of performance on defense they wanted. This week has been a huge harp on executing what we have to do. Ole Miss is a great team; they do great things on offense. It’s a huge challenge for us, and we’re looking forward to that challenge. And being able to execute throughout the week.”

“It’s really Iowa State’s defensive scheme, where it’s a 3-4 scheme but they’re dropping eight guys (into coverage) a lot,” Saban said. He also notes that Ole Miss had a new coaching staff last year without a spring practice to get the defenders acclimated because of the pandemic.

Whatever the factors, both defenses are hoping to avoid a repeat of last year’s game.

The offensive players wouldn’t mind it as much.

“It was crazy, man,” Alabama left tackle Evan Neal said. “There’s nothing like a shootout. But as an offensive player, those are the really fun games.

“They’re a great team, their defense has really improved from last year, and they have a really high-powered offense. So I’m just excited to compete on Saturday.”