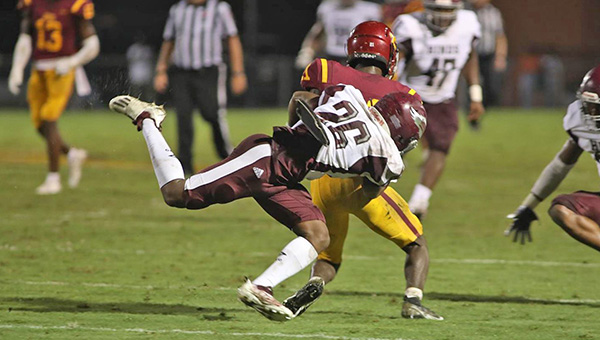 ELLISVILLE — Hinds Community College controlled the football, but not the scoreboard, in its Top 15 showdown with Jones College.

No. 5 Jones used several long scoring plays to pull ahead, and then ultimately slam the door on its 28-13 victory over No. 14 Hinds on Thursday.

Lardarius Webb returned an interception 75 yards for a touchdowns, while Quaterius Hawkins threw two touchdown passes and ran for another score for Jones (5-0, 2-0 MACCC South). Hawkins scored on a 26-yard run, and threw TD passes of 45 and 84 yards to Bud Tolbert.

Hinds (3-2, 1-1) held the ball for more than 35 minutes and ran 78 plays to Jones’ 47, but struggled to put points on the board. Hinds had drives of 10, 13 and 13 plays in the first half that ended with Webb’s interception return and two missed field goals. An eight-play drive in the third quarter ended with a blocked 26-yard field goal attempt.

Hinds scored twice in the third quarter, on a 14-yard run by quarterback BeSean McCray and a 1-yard run by Jeffrey Pittman, to cut it to 21-13 with under a minute to go.

On the next play from scrimmage after Pittman’s touchdown, however, Hawkins hit Tolbert for an 84-yard touchdown to once again make it a two-score game. Hinds punted on all three of its possessions in the fourth quarter.

Hawkins finished 8-of-17 passing for 172 yards and two touchdowns, and ran for 62 yards and a TD. Tolbert’s two touchdown receptions were his only two catches in the game. La’Damian Webb had his fifth 100-yard game of the season for Jones, finishing with 125 yards on 23 carries.

For Hinds, McCray completed 18 of 36 passes for 210 yards, with no touchdowns and one interception. He was sacked four times. Former Vicksburg High star Cedric Phillips had five carries for 23 yards.

Zias Perryman ran for 129 yards on 18 carries for East Mississippi, and also caught two passes for 37 yards and a touchdown.

Jones threw two touchdown passes in the first quarter and ran 8 yards for a TD in the second as East Mississippi jumped out to a 27-0 lead with 9:11 left in the second quarter.

Northwest quarterback Michael Hiers threw a pair of touchdown passes to D.T. Sheffield as the Rangers chipped away at the deficit and cut it to 27-21 with 5:38 left in the game. East Mississippi answered with a 34-yard field goal by Peyton Rodgers with 2:53 remaining, however, to seal it.

Itawamba took a 17-10 lead on a 22-yard field goal by Shane Lasher midway through the third quarter. Northeast rallied back with a 40-yard touchdown pass from Putt to Mondrel Boykins to tie it, and then took the lead on a 30-yard TD pass to Dallas Payne with 11 seconds left in the game.

Tony Washington returned an interception 37 yards for a touchdown on the final play of the game to pad the score for Northeast.

Llanes Dickerson scored two touchdowns for East Central, on a 1-yard run and a 25-yard pass. Both came in the second quarter.

Will Young rushed for 49 yards and two touchdowns for Pearl River. His 1-yard TD with 7:30 left in the fourth quarter tied the game at 14, and then Van Winkle won it in the final seconds for East Central.

Short also threw a 60-yard touchdown pass to Jalen Bracey in the third quarter as Gulf Coast rallied from a 13-0 halftime deficit. Short was 27-of-41 passing for 223 yards, with two touchdowns and one interception. Bracey had five receptions for 85 yards, and Dorsey had nine for 74 yards.

Gulf Coast played in the aftermath of losing teammate Levi Madison, who died in a car wreck last week. There was a team-only memorial service on campus Sunday night, and Madison’s visitation and funeral will take place Friday and Saturday in Meridian.