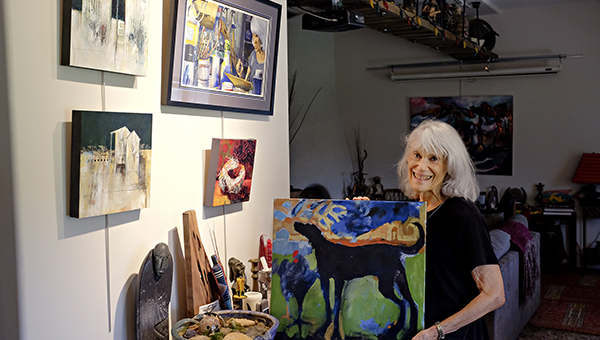 Owner of the Attic Gallery, Lesley Silver poses for a portrait with artwork that will be displayed during the 47 Years on Washington Street Art Opening on Friday. (Courtland Wells/The Vicksburg Post)

Walk up the stairs at 1101 Washington St. and enter a whole new world.

Visiting The Attic Gallery atop the Highway 61 Coffee House allows visitors to escape their worries for a while and indulge their senses with works of art lining the walls and adorning the floor.

That’s the atmosphere owner Lesley Silver tried to create 50 years ago, even when the gallery first opened at 1406 Washington St., in the building now occupied by Sassafras — to walk up the steps and enter a unique world.

“I thought that people would love coming up the stairs because they left their worries behind; it was a different world and they still say the same thing,” Silver said in a 2018 interview. “What we’re doing is connecting the people with the art and making them breathe differently and feel differently.”

There was a time when an art gallery was a foreign idea for Silver, and it was as distant as the Milky Way.

Although her mother was an artist and she was surrounded by art, Silver said she wasn’t that interested in following in her footsteps.

When her parents moved from New York to Alabama in the 1940s, Lesley continued her aversion to art.

When she was a student at the University of Alabama, she took an art class, and it was a disaster.

“I showed my work to my grandfather, and he said that was terrible,” she said.

It took a series of events over about 11 years before The Attic Gallery became a reality, and it began with a man named Mike Silver of Vicksburg, whom Lesley met and married.

When Mike was discharged from the Army in 1964, the couple went to the New York World’s Fair and then to Lesley’s parents’ home, where they lived while Mike looked for a job. That October, he found one — helping his father at the family jewelry store in Vicksburg at the request of his mother.

The couple later built a home in Marion Park and by 1966 had two children.

But art was still a part of Leslie’s life.

“Every time we went anywhere, I gravitated to the art, because I grew up with art all around me; I was surrounded by it,” she said.

It was a trip to California and a visit to the Comsky Gallery in Los Angeles, Calif., that started the move toward the gallery. Gallery owner Cynthia Comsky talked with Lesley and Mike about art, and they had dinner with Comsky and her husband. Comsky also told Mike if he would send her $500, she would send art. He took her up on the offer.

The artwork arrived June 8, 1971, while Leslie’s daughter was having her birthday party and the women attending with their daughters all bought something.

More packages followed. When the artwork began stacking up in the couple’s living room, Mike suggested Lesley consider using the attic above Versils, the family store at 1406 Washington St.

“I went up into the attic, and there was no electricity,” Lesley said. “I walked up in the dark and it was sort of a very mysterious, haunted, but more than that, it had decks of cards under the linoleum; you knew it was right on the river, it had been used for gamblers and it had its own history, and it was kind of exciting.”

With the help of some friends, she began cleaning out the attic and clearing the floor for exhibit space.

She later invited the Ferdinand Roten Gallery of Baltimore, Md., which brought artwork to different areas. The gallery agreed to come to Vicksburg but told her she would need to get eight tables. She would also be able to get 20 percent in cash or artwork from the sales.

“They came and people really supported it in Vicksburg, because there were Roloffs, there were real Picassos; this was something that had a reputation with all the educational institutions,” she said.

When the Roten Gallery left, Lesley began asking local artists to show their work in the gallery.

The gallery got the name The Attic Gallery because of its location in the Versils attic.

Fast forward to 1997. Leslie and Mike divorced; she married Daniel Boone, and they had just bought the building at 1101 Washington St., the location of the former Delchoff’s Restaurant.

The art was transferred from the former gallery location to the attic of the coffee house on the summer solstice in 1997.

“There were about 75 people, and everybody picked up something, and we all put a piece of art in this building,” she said. “The next day, everybody went to the old place and they got stuff out, and we never closed for a day. The community was just so supportive and important to us.”

The gallery’s collection is a mix of artists who are in museums, artists who have been homeless, and artists of every ethnicity. It is also a gallery for local artists — a distinction that earned Leslie the 2014 Mississippi Arts Commission’s Governor’s Award for Art in the Community in part for her work helping local artists find a market for their work.