Gambles backfire on Ole Miss in lopsided loss to Alabama 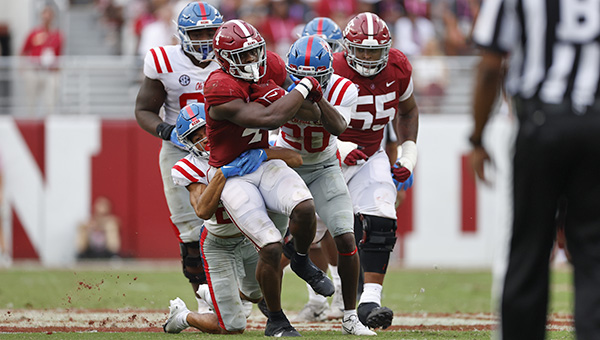 Alabama running back Brian Robinson Jr. (4) drags a pack of Ole Miss defenders down the field on Saturday. Robinson rushed for 171 yards and four touchdowns as the top-ranked Crimson Tide beat No. 12 Ole Miss 42-21. (CrimsonTidePhotos/Southeastern Conference)

TUSCALOOSA, Ala. (AP) — The defense kept giving Alabama back the ball, and the offense repeatedly delivered it into Brian Robinson Jr.’s hands.

It was a simple but oh-so-effective formula.

Robinson rushed for career highs of 171 yards and four touchdowns, and No. 1 Alabama mostly throttled the nation’s top offense in a 42-21 victory Saturday over No. 12 Ole Miss.

Bryce Young passed for a couple of touchdowns for the Crimson Tide (5-0, 2-0 Southeastern Conference) but the ‘Bama defense and ground game stole some of the thunder from a matchup of the two leading Heisman Trophy contenders coming into the game.

“It was a great opportunity for us today to show how physical we can play for 60 minutes,” said Robinson, a fifth-year senior who carried 36 times in his first 100-yard game.

Alabama turned to Robinson to play keep away from Matt Corral and the offense of the Rebels (3-1, 0-1), who had breezed through three non-conference games before an open date but had some gambles that backfired.

Nick Saban improved to 24-0 against his former assistants, but ex-offensive coordinator Lane Kiffin didn’t help his own cause with three failed fourth-down calls in the first half. Saban turned the tables with two touchdowns on fourth-down plays, and the Tide was 3-for-4 overall on fourth down.

The Rebels had converted 12 of 14 fourth-down opportunities coming into the game. They added two to that total on Saturday, but the three misses hurt badly.

One misfire came on the game’s opening possession and ended a promising drive at the Alabama 6-yard line. Two others came in their own territory and set Alabama up for short scoring drives. The Rebels also lost a fumble at their own 23 that led to another 1-yard touchdown run by Robinson and a 28-0 lead for Alabama with 57 seconds left in the first half.

“I’m sure I got killed by going for it on fourth down, but that’s analytics,” Kiffin said. “We believe in our players, and it doesn’t work all the time. When it doesn’t work and you follow the book, it doesn’t look good.”

Young completed 21 of 27 passes for 241 yards and was intercepted once for Alabama, which led 28-0 at halftime. Oddsmakers had him as the second-leading Heisman candidate coming into the game, behind only Corral.

Corral, the Rebels’ star, ran for a touchdown but was mostly held in check by a team he torched last season. Corral also passed for a touchdown, completing 22 of 32 passes for 213 yards while losing a fumble. Corral extended his streak of games with a TD pass to 16 with 2:23 left, matching Eli Manning for the second-longest such streak at Ole Miss.

“We got dominated up front,” Kiffin said. “That ain’t hard to see. Matt didn’t have much time. We had negative runs.”

Alabama’s defense, burned by Ole Miss for 48 points and 647 yards a year ago, made the big fourth-down stops and plenty of others.

The Tide limited Ole Miss to 291 total yards, despite giving up a pair of fourth-quarter touchdowns. The Rebels came in leading the nation with 635 yards and 53 points per game but couldn’t get that tempo going consistently this time.

“We prepared all week for it,” Alabama defensive lineman Phidarian Mathis said. “We knew it was coming and we worked our tails off. I think that really got us ready for the fastball all week long.”

Ole Miss was without second-leading receiver Jonathan Mingo, who was wearing a boot on his left foot and didn’t dress out.

“We played the whole game in the same personnel group, so we didn’t get into all this substitution stuff that was a problem for us last year,” Saban said.