More than 200 turn out for Bricks and Spokes in Vicksburg 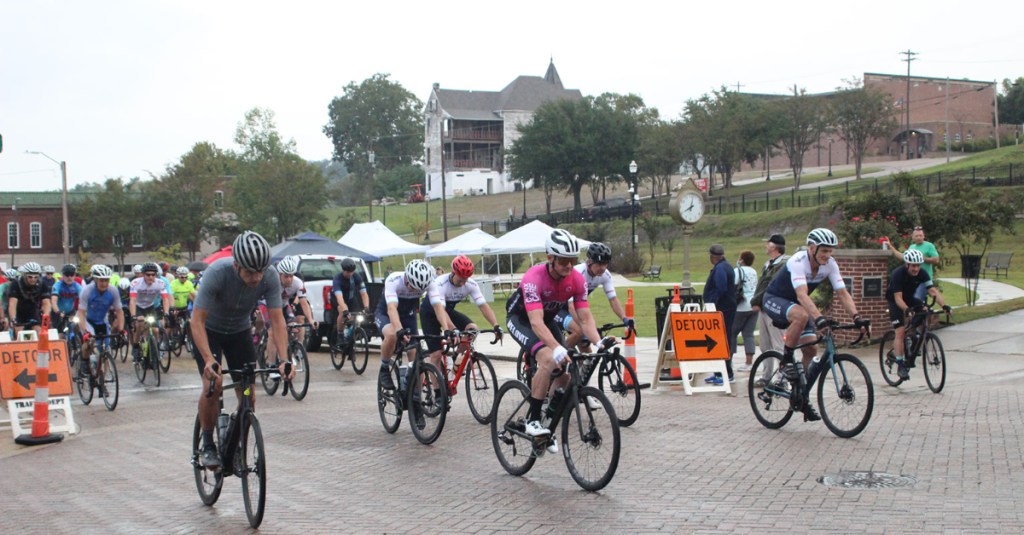 Cyclists move down Washington Street at the start of the Downton Vicksburg's 11th Bricks and Spokes Saturday. The annual fall bike ride returned to the city after a one-year layoff in 2020 because of COVID-19. (Photo by John Surratt)

Robert Angelo of Brandon and Susan Foff of Madison took cover from the light rain under an umbrella early Saturday morning as they stood in line to register for Downtown Vicksburg’s 11th Bricks and Spokes bicycle ride.

Bricks and Spokes veterans, Angelo and Foff were among the 212 riders participating in the event and were among many people who came from the surrounding communities to participate in the ride through the city and county, which was making its return after a one-year layoff because of COVID-19. The event is Downtown Vicksburg’s biggest fundraiser.

The cyclists were greeted by the light rain, which accompanied them at the start of the race and continued through most of the morning.

Don Grayson from Flowood, Marsha Shaw from Brandon and John Bush from Madison, all members of the Party Pack Cycle Team, ignored the rain as they stood along Grove Street waiting for the ride to start.

“I like the scenery and this year they have a gravel course,” Bush said. Shaw said she liked the party at the end of the ride.

As for the name of the “team?”

“We rode in a gravel ride and finished last; we figured we’d call ourselves the Party Pack,” Bush said.

Katherine Winters and daughters Lizzie, 10, and Maggie, 8, were riding for another reason.

“Lizzie wanted to do this,” Winters, who has ridden in the event before, said. “She wanted to ride over the bridge. She’s been training for several weeks and riding in the battlefield (Vicksburg National Military Park). Maggie is along to hang around.”

“We were excited to bring Bricks and Spokes back this year even though COVID is still with us and despite the rain,” Downtown Vicksburg Executive Director Kim Hopkins said.

While the event still featured a ride across the Old Highway 80 Bridge and routes ranging from 10 miles to a 62-mile route that went through the Vicksburg National Military Park, this year’s event included 30-mile and 45-mile gravel routes and a 23-mile route featuring a rest stop at the Southern Heritage Air Foundation Museum in Mound, La.

“Gravel (bicycle courses) are big right now and some places have had gravel rides,” Hopkins said. “We felt we would include them this year as a change.”

But the gravel courses were not what inspired Angelo and Foff to return to Vicksburg.

Foff, also enjoys the bridge, but added, “This is a well-run event; it’s put together very well.”