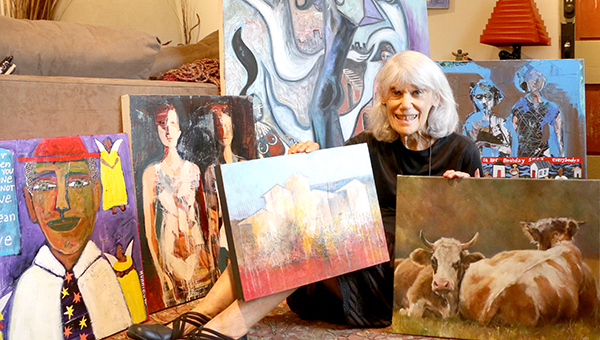 Vicksburg’s Attic Gallery celebrates 50 years of business this weekend, none of which would have been possible without the gallery’s owner, Lesley Silver.

Throughout the years, several artists she discovered have been able to rise above their circumstances and find a platform to exhibit their work — not only that but earn a living wage doing what they love. From hometown artists like H.C. Porter and Kennith Humphrey to regional artists like Ellen Langford and Lynthia Edwards, the Attic Gallery and Silver’s guidance has created a hub for Southern artists in Vicksburg.

For H.C. Porter, a University of Alabama graduate who first connected with Silver more than 20 years ago, the Attic Gallery was a safe haven to discover her artistic voice and learn the ins and outs of selling art. Although she’d opened her gallery in Jackson in 1987, Porter said she wanted to branch out in Mississippi’s art community. Enter Silver.

“Lesley was the sunlight and the water to so many of us young artists. I came over, and brought some really, really early work to Lesley. I had zero voice, and she was still encouraging,” Porter said. “Later, as I began to really understand my own personal vision and started putting that together, I came back to Lesley and I was looking for other outlets for my paintings.

“She was so supportive and gave me not only an outlet for my work — she gave me my first big show.”

The sentiment was echoed by Kennith Humphrey, who came from humble beginnings and, through displaying his artwork at the Attic Gallery, rose from “bad times” to better times.

Humphrey, a painter who works in several mediums, is famous for his bright-colored impressionist-inspired works that depict what he calls everyday life. A Vicksburg native, Humphrey said his thankfulness for the Attic Gallery knows no bounds.

“Lesley’s the first one who gave me a shot 22 years ago,” Humphrey said. “I’m just painting everyday things, my history, my life. I’ll see something and paint it.

“She started me off. She introduced me to it. She’s a really good friend. … She sees talent in any artist. If she sees your art, she’ll give you a chance. She’s more than just an art dealer; she’s a good friend.”

While many of the artists at the Attic Gallery are based in Mississippi, one Birmingham, Ala. artist said exhibiting her work at the gallery has allowed her to quit her day job and pursue the life of her dreams, as a full-time artist.

“We set up a meeting in Birmingham, just to get a feel for one another and have a chat, and it was magic. I met Ms. Leslie and it was as though I had known her forever. Her spirit, her energy, her wisdom was just mind-blowing,” Edwards said. “I felt so at home, like ‘I could trust this person with the artist I was going to become.’ From there it’s been a beautiful partnership and friendship. She’s almost like family.”

While she’s worked in several mediums, from painting to quiltmaking and everything in between, the pieces that put Edwards on the map are her collages.

The full-time artist lifestyle is something Edwards said she’d dreamed of, but never thought she’d be able to make into reality until she found the confidence to chase her dreams.

“Lesley and her gallery gave me confidence that my work was valuable. There was an audience and people who were interested in the works I was making,” Edwards said. “She would listen and hear the stories and was able to pass that along to individuals who were interested in my work, because she had a connection with me.

“Lesley, I am so thankful for you. I am thankful for your friendship, your guidance, for you extending your hand to me to bring me into your family. I will never forget where I came from, and that is the Attic Gallery.”

Mississippi artist and longtime friend of Silver, Ellen Langford, said it’s not lost on her that Silver and the Attic Gallery are one of the most important art resources in the state of Mississippi.

Langford has displayed her works there since 1998, after meeting Silver while visiting her brother and sister-in-law. The gallery, for herself and other artists, is what she called a “refuge.”

Langford, who will be painting in the gallery’s courtyard on Saturday as part of the 50th-anniversary celebration, said she wished to give Silver “an enormous thank-you.”

The celebration will reach its finale Saturday night, with a 50-artist show at the Attic Gallery beginning at 6 p.m.

Porter, whose own gallery is just down the street from the Attic Gallery, said she applauds and admires Silver for her storytelling abilities and the connections she establishes with artists — connections that last far beyond initial discovery.

“She was our water and our sunlight when we had little bitty tiny seeds that we would bring to her. Of course, she’s selling paintings, but those artists’ stories are what she’s selling, too,” Porter said. “She’s really like ‘Mother Art’ in her own presence. She brings a motherly, supportive presence for each of us. She’s elevated all of us as artists.

“We love you, Lesley. It’s hard to think of Vicksburg without the Attic Gallery.”