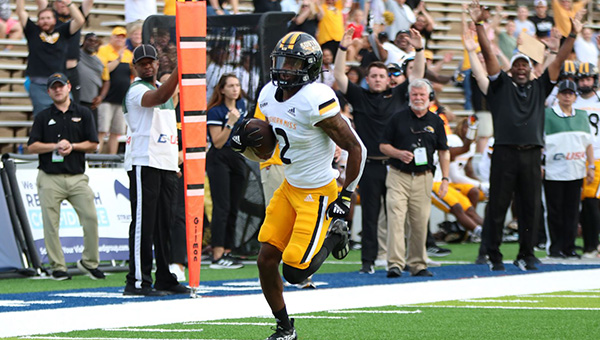 Southern Miss' Chandler Pittman runs into the end zone for a touchdown Saturday against Rice. It was USM's only offensive touchdown in a 24-19 loss. (Southern Miss Athletics)

Southern Miss’ season of offensive frustration continued into the Conference USA portion of the schedule.

Southern Miss outgained Rice, but its offense turned the ball over four times and only found the end zone once as it lost 24-19 to Rice in its Conference USA opener on Saturday.

Nine of its 19 points Saturday came from the defense and special teams, as Camron Harrell returned a kickoff 95 yards for a touchdown in the third quarter and Rice took an intentional safety in the final seconds of the game. The only offensive touchdown came in the first quarter, when Chandler Pittman caught a 31-yard touchdown pass from Jake Lange.

Southern Miss finished with 378 total yards to 325 for Rice. In addition to the turnovers, it had 10 penalties for 90 yards and had a field goal blocked on the final play of the first half.

“We really did a lot of things much better. We lost the turnover battle 4-0 and that’s why we lost the game. And we got a field goal blocked, which is inexcusable right before the half. Outside of that, we won every statistical thing here is to win,” Southern Miss coach Will Hall said. “We had a lot more penalties than we normally have, which killed a few drives, and there were some timely penalties in there. But the turnovers were the difference or we win the game.”

Keyes was injured on Southern Miss’ opening drive, which forced Hall to turn to the third-string quarterback Lange. The freshman from Jackson Prep finished 23-of-37 for 304 yards and one touchdown, but threw three interceptions and was sacked five times in the first game of his college career.

“He had a few plays you’d like to have back with a few picks and he took a sack or two that he liked to have back,” Hall said. “Kid walked over from Jackson Prep and proved everybody wrong, and all of a sudden he’s in the game and gave us a chance to win. We’ve got to play better around him.”