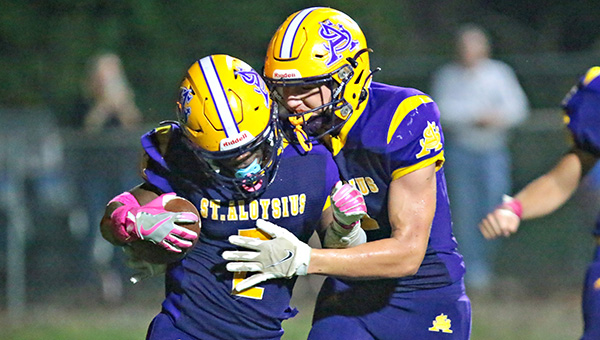 St. Aloysius running back Padre Gray, left, celebrates with a teammate after scoring a touchdown in the first quarter of Friday's game against Clinton Christian. Gray ran for 163 yards and two TDs as St. Al won 30-0. (Walter Frazier/For The Vicksburg Post)

The St. Aloysius Flashes had to sweat out their first victory of the season right until the final play. This one, they got to savor for a long time.

Padre Gray, Damien Reeves and Cooper Madison each rushed for more than 90 yards, and the Flashes amassed 352 rushing yards as a team as they routed Clinton Christian 30-0 on Friday.

“They came out a little flat in the first quarter, but once we amped up we poured it on them at that point,” St. Al coach Bubba Nettles said. “It’s absolutely wonderful. I’m excited for these young men. They deserve it.”

Gray had his second big rushing game in a row. After going for 222 yards in the win over Cathedral, he had 163 yards and two touchdowns against Clinton Christian (3-5, 0-3).

Gray started St. Al’s scoring with a 21-yard touchdown in the first quarter, and finished it with a 20-yarder in the fourth.

Reeves had 98 yards and one touchdown, a 24-yarder in the third quarter, on nine carries. Madison only had five carries, but one of those went for 59 yards and he finished with 94.

The Flashes averaged 7.8 yards per carry as a team as they turned to the run to fill the void left by injured quarterback Tristan Wilbanks. The senior hurt his throwing hand against Cathedral and did not play Friday. His backup, Carson Smith, threw a 5-yard TD pass to Chase Tucker.

“Our game plan without Tristan in there was to turn around and give the ball to our running backs,” Nettles said.
Madison had a big all-around game. In addition to his rushing total, he intercepted a pass on defense and kicked a 36-yard field goal in the second quarter.

Will Dowe also had an interception, and Land Oglesby had several tackles for loss.

“The entire defense deserves a shout out for the shutout,” Nettles said. “That was big time. They even got into the red zone twice and we held them to no points, so that was a big deal.”