Sports column: Officials are needed in Mississippi. Will you answer the call? 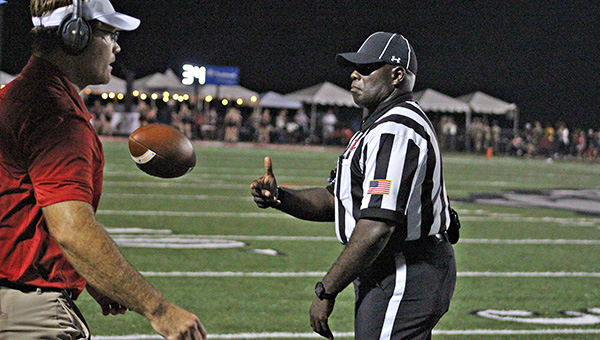 An official flips the ball toward the sideline during Friday's football game between Warren Central and Brandon. (Ernest Bowker/The Vicksburg Post)

Earlier this week, the Mississippi High School Activities Association announced some schedule changes for the final two weeks of its football regular season.

The reason for the switch was simple ­— a lack of officials. A long decline in the number of officials in all sports has occurred nationwide, not just in Mississippi, and the COVID-19 pandemic the past couple of years has only exacerbated the situation.

The declining number of officials should not be a huge surprise. It is a difficult and often thankless job. A lot of training goes into becoming one, both physically and mentally.

Officials must be in good enough physical shape to keep up with the action and learn the tricky on-field mechanics of where to be and when. Mentally, they must know the rules inside and out, and process split-second decisions in even smaller split-second increments.

If you get it wrong, you’re the biggest villain in town. Even when you get it right you’ll be booed a lot of the time. The reactions to your calls sometimes lead to verbal abuse, on rare occasions even physical altercations.

For all of that, you will be paid the princely sum of somewhere between $35 and $100, depending on the sport and level of the game. That does not include travel expenses, so while officiating games can be a decent side hustle it’s not a way to put food on the table.

So why do it then?

The answer there is simple as well — love of the game. Staying connected to it. Making friends and being involved in the community. Officiating is a way to do all of those, and to help this giant enterprise of high school sports continue for generations to come. As thankless as the job can be, it’s also selfless.

Berating and booing officials is as old a tradition as sports itself. But the next time you run into one at a game, take a second to thank them for their service.

Better yet, join them.

The MHSAA has an employment application for officials on its website. You can apply for football, basketball, baseball, soccer, volleyball or softball. If you’re looking for a new hobby or to get involved with a sport you love, it’s a great way to check off a couple of those boxes.

Officiating is a thankless job, but somebody has to do it. Will it be you?