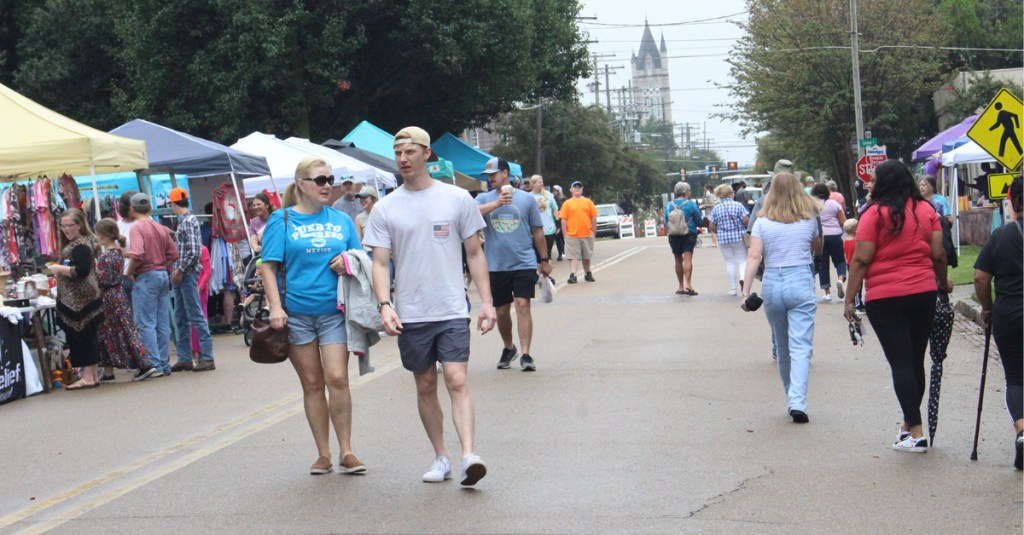 Visitors to the Old Court House Museum fall flea market look over the booths as they walk down Cherry Street Saturday. Early rain slowed shoppers but business picked up for the vendors later in the day. (Photo by John Surratt | The Vicksburg Post)

Shoppers braved an early morning rain to look for bargains and unusual gifts in the booths lining Cherry and Jackson Street Saturday during the Old Courthouse Museum’s fall flea market.

“We’ve got 124 booths — 117 crafts and 17 food booths,” said museum historian Jordan Rushing. “I think this is the best one we’ve had in a couple of decades.”

He said the early rain caught everyone by surprise, “but it didn’t seem to slow the vendors down; they were setting up their booths like everything was normal.”

When the rain stopped about 9 a.m., the shoppers started coming out to tour the craft booths and sample the wares produced by food vendors set up along Monroe Street.

Whether it was the meat and crawfish pies sold by Christ Episcopal Church, the chili, hamburgers, hot dogs and other dishes prepared and served by the members of the Apostolic Church of Vicksburg, or cracklings and funnel cakes sold by other groups, flea market shoppers did not go home hungry.

Much of the traffic, however, stayed on Cherry and Jackson streets as the shoppers looked over birdhouses, T-shirts, signs, yard decorations and a variety of soaps, jewelry, sweets and other items.

Stephanie Austin was one of the shoppers making the rounds, stopping to buy a T-shirt at one booth while trying to corral her dog Belle, who was doing her own exploring.

“She’ll go anywhere you want to take her,” Austin said. “This is my annual visit to the flea market with my daughter Morgan.”

Beth Jones looked over some items at one booth while taking care of her granddaughter Annaliese, as her daughter Sharon Ann Kelsey looked over other items.

“I just came to see what stuff they had,” Jones said.

The vendors reported slow business during the early hours of the market, blaming the rain that kept shoppers home for a while.

“We had a lot of tire kickers,” said Cynthia Elabor of CyntSational Glam and Accessories, which sold jewelry and other fashion items. “We had a lot of lookers and some customers.”

Gaye Stokes of The Coo-Coo’s Nest was selling birdhouses. Sh said business started slow, “but it’s beginning to pick up” with the end of the rain.

Rushing said later in the morning that the crowds were beginning to pick up.

“During COVID, people couldn’t get out and because they were kept inside, the vendors had time to work on their crafts and improve them and they now have an opportunity to show what they have,” he said.

The flea market, Rushing added, “Gives people a chance to get out and do some things they haven’t been able to do. This gives them a good outing.”