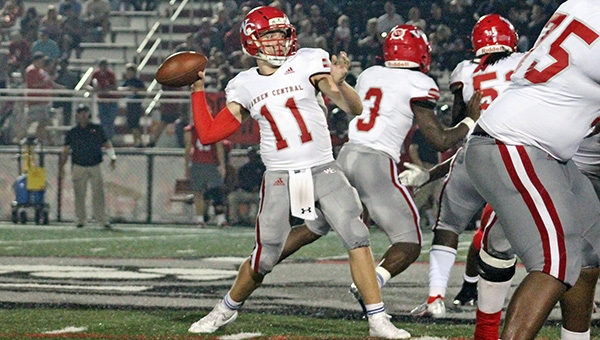 Warren Central quarterback Jack Wright (11) sets up to throw a pass against Brandon. Wright completed 11 of 22 passes for 116 yards and one touchdown, and also ran for a TD, in a 38-20 loss. (Ernest Bowker/The Vicksburg Post)

1
For 50 years, Warren Central has made its name on offense with a power running game rather than a deep vertical passing game. That doesn’t appear to be changing any time soon, but the Vikings are starting to work some big passing plays into their arsenal.

Sophomore quarterback Jack Wright has had six of his 18 completions go for 30 yards or more in the last two games. Wright made his first start in a 38-20 loss to Brandon on Friday and completed a 34-yard pass to Trey Hall and a 40-yard touchdown to Preston Lynch just before halftime.

The previous week, against Oak Grove, the Vikings aired it out late in the game and Wright’s last three completions were all deep balls covering 30, 40 and 43 yards. The 40-yarder was a touchdown to Hall.

In five games, Wright is 26-of-45 for 471 yards and four touchdowns, with three of the TDs covering 40 yards or more. He also had a 61-yard touchdown in the season opener against Forest Hill, although Hall did most of the work on that one after catching a wide receiver screen.

Warren Central coach Josh Morgan said the sudden surge of deep passes has been the result of opponents loading up to stop the running game. It’s allowed receivers Hall, Lynch and Jaylon Trisby to get open against man-to-man coverage on deep routes, and Wright has been able to get it to them.

“That’s the way teams are playing us. We had some opportunities there and it’s putting the defense in a little bit tougher situation,” Morgan said. “You have to pick one or the other. You load the box to stop the run or play a little bit more coverage in the secondary. It’s encouraging to see that. It makes us a little bit harder to defend and more dynamic, for sure.”

2
Jake Lange started the season buried on Southern Miss’ quarterback depth chart. He started last week leading the scout team. When the Golden Eagles host UTEP next week he might be the starter, period.

Lange, a true freshman from Jackson Prep, became the third Southern Miss quarterback to see action in the first five games this season when he took over for an injured Ty Keyes in the first quarter of a 24-19 loss to Rice. Keyes had earlier replaced Trey Lowe, who was hurt in Week 2 against Grambling.

“I think when Ty got hurt I knew I was prepared. There’s some plays I would like to have back, but I just I’ve been waiting on this moment my whole life,” Lange said. “I worked hard, I think, and I just want to give our team the best chance to win. 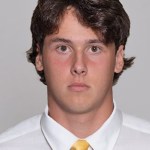 Despite seeing the first playing time of his college career, Lange had the best game by a USM quarterback so far this season.

He entered on the second series against Rice and led the Golden Eagles to a game-tying touchdown, with a 31-yard TD pass to Chandler Pittman. Lange finished 23-of-37 passing for 304 yards and one touchdown, although he did throw three interceptions and was sacked five times.

Lange’s yardage total was more than Lowe had in his two games, and only 51 less than Keyes had in four games.

“I think I prepare every day to be the guy. That’s that’s been my mindset ever since I started playing football,” Lange said. “It was a great challenge every week going into our scout team defense or going against a real defense, so being on the scout team elevated my game exponentially.”

3
Mike Leach’s Air Raid offense has had an uneven first season and a half at Mississippi State, but when it comes to passing statistics it is doing the job.

MSU quarterback Will Rogers completed 46 of 59 passes for 408 yards, three touchdowns and no interceptions in a 26-22 win over Texas A&M on Saturday. Rogers completed 13 of first 14 passes, and had five completions of 20-plus-yards to five different receivers in the game. On Monday, he was named the Southeastern Conference Offensive Player of the Week.

Fourteen games into his college career, the sophomore is Mississippi State’s career leader in completion percentage at 72.1 percent. K.J. Costello is second at 64.1 percent, and Dak Prescott third at 62.8.

Rogers also had his sixth 300-yard game, which trails only Prescott’s nine on MSU’s career list.

Rogers currently ranks third in the country in passing yardage (1,862) and yards per game (372.4), and is tied for seventh in passing touchdowns (14).

4
The Baltimore Ravens could have taken a knee and run out the clock Sunday against the Denver Broncos. They elected to set an NFL record instead.

The Ravens were ahead 23-7 in the final seconds, but in danger of coming up just short of matching the Steelers’ longstanding mark for consecutive games with at least 100 rushing yards. Then Baltimore cornerback Anthony Averett intercepted Broncos backup QB Drew Lock in the end zone with 3 seconds left.

Rather than take a knee, Ravens quarterback Lamar Jackson took the shotgun snap and hustled around left end for 5 yards as time expired. That gave the Ravens 102 yards on the ground, their 43rd consecutive 100-yard rushing game, tying the mark set by Pittsburgh from 1974-77.

“Oh yeah, 100 percent my call,” Ravens coach John Harbaugh said afterward. “That’s one of those things that’s meaningful. As a head coach you have to be mindful of your team and your players and what it means to them. It’s a very, very tough record to accomplish and it’s a long-term record.

The Associated Press contributed to this report