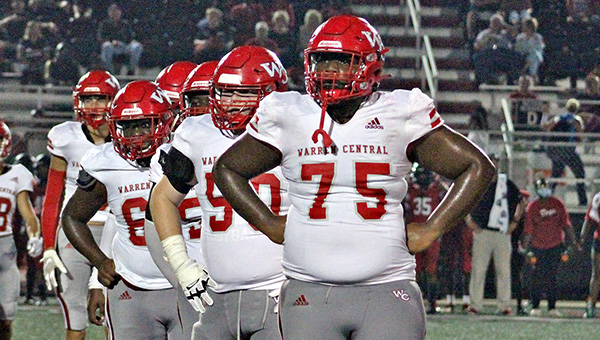 Warren Central's offensive linemen, including Dontavius Bell (75) and Colt Lee (50), look toward the sideline for a play call during last week's game against Brandon. Bell and another lineman, K.J. Miller, were picked Wednesday to play in the 2021 Mississippi-Alabama All-Star Game, while Lee was selected to play in the Bernard Blackwell Mississippi All-Star Game. (Ernest Bowker/The Vicksburg Post)

Warren Central football head coach Josh Morgan has often said that his offensive line is one of the best in Mississippi. Now, they’ve got some accolades to back up the claim.

“It says a lot for our program and our kids. It’s an individual honor, and a really big team honor,” Morgan said. “Those are three, three-year starters and they are deserving. They’ve done a lot for our school and for our football team.” 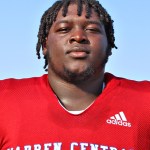 Manager William Barnum was also selected to participate in the Mississippi All-Star game.

“Will has done a good job. When we nominate somebody for that (manager) position, the coaches know they’re going to get a good one, and he’s continuing that tradition,” Morgan said.

The selection of Miller and Bell marks the fourth time in five seasons that Warren Central has had an offensive lineman picked for the Mississippi-Alabama All-Star Game. It’s the first time in at least a decade that the school has had two players picked.

Lee, meanwhile, will join a similarly long list of Warren Central players who have been chosen for the Bernard Blackwell game. WC has had a player, including two offensive linemen, in the North-South all-star game in six of the past seven seasons.

“It runs in cycles. We’ve been on a hot offensive line streak lately,” Morgan said. “Not only are they playing at an all-star level, they’re going on to the next level and doing really well. It’s been a long list of guys. These three love football and play the right way, and Coach (Bumper) Brogdon) and Coach Rob (Morgan) have done a good job developing them.”