Flashes suddenly in the playoff hunt 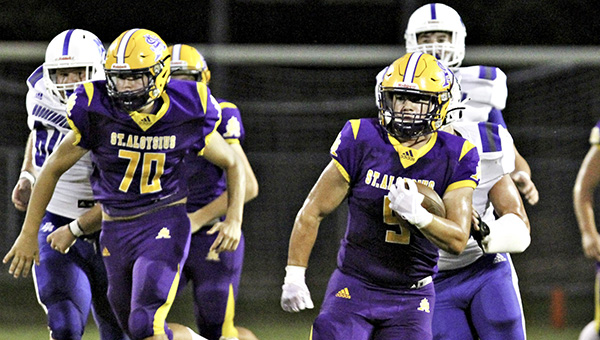 St. Aloysius fullback Damien Reeves (5) runs down the field against Brookhaven Academy. Reeves had 98 yards and a touchdown in last week's 29-0 win over Clinton Christian. (Paul Ingram/For The Vicksburg Post)

The blazing summer sun has cooled, but it’s shining a little bit brighter over St. Aloysius’ Balzli Field lately. The birds are singing a little more in tune. And the stench of sweat is still strong as ever, but even it smells a little bit sweeter.

“It’s been a lot more pleasant at my house,” St. Al football coach Bubba Nettles said with a laugh.

The reason for the good mood is not hard to spot. Just a few weeks after they were mired in the depths of a five-game losing streak, the Flashes have ripped off two wins in a row and find themselves in the middle of a playoff race.

The turnaround has salvaged what appeared to be a lost season and been a reward for hanging in through dark times.

“These kids have shown tremendous heart throughout the entire season, so those two victories are entirely on them and I couldn’t be happier for them,” Nettles said.

The wins vaulted St. Al (2-5) to 14th in the MAIS Class 4A power point rankings that determine wild card selections and playoff seeding.

The difficult schedule that contribute to St. Al’s 0-5 start, ironically, could be its salvation. The power point formula rewards teams not only for their own victories, but those of their opponents. St. Al’s opponents have a combined 44-26 record, and none have won fewer than three games.

The strength of schedule component of the formula has compensated for St. Al’s lack of victories, to the point that its brief winning streak has gotten it into the playoff race and one more win might be enough to clinch a spot.

The road to the finish line begins Friday with a road game at Copiah Academy (5-2), and then continues at Greenville-St. Joe (5-1) and at home vs. Tri-County (7-0).

“One more victory out of the next three would solidify it. But they’re going to be three of the toughest victories that are probably out there for anybody to get,” Nettles said.

The good news for St. Al is that it has played its best football of the season the past two weeks. It rushed for nearly 300 yards in wins against Cathedral and Clinton Christian, and the defense posted a shutout against the latter.

The key, Nettles said, was cleaning up the mistakes that had plagued the Flashes earlier in the season.

“We did not shoot ourselves in key moments. That was the big one,” Nettles said. “Against Cathedral, we didn’t extend a drive for them with a dumb penalty or back us up from a dumb penalty. The missed blocks were way lower than in the 0-5 run. We were putting ourselves in position to be successful, and not the other way around. When that happens, we can become very successful.”

Another big factor has been the success of the running game. Padre Gray has run for 385 yards and three touchdowns in the two wins — matching his yardage total from the first five games combined.

“Padre is a freak of nature athlete. He is a fantastic running back,” Nettles said. “He has great vision, and in that 140- or 150-pound frame I would put him up against anybody in Warren County in terms of strength. His nickname is ‘Quadre’ because his squat is almost 500 pounds. He runs like he’s 220, which is what you want.”

St. Al had 352 rushing yards as a team in last week’s win, which Nettles said shows the balance of the backs and the improved play of the line.

“They’ve done an excellent job opening the holes, blocking the right man, blocking through the whistle and not letting them fight off and make a tackle,” Nettles said. “And I’m not going to discredit Damien Reeves. He is Padre’s lead blocker. Without him, Padre is one or two yards and a cloud of dust. Damien Reeves’ position at fullback, in our offense, is probably more important than the quarterback.”