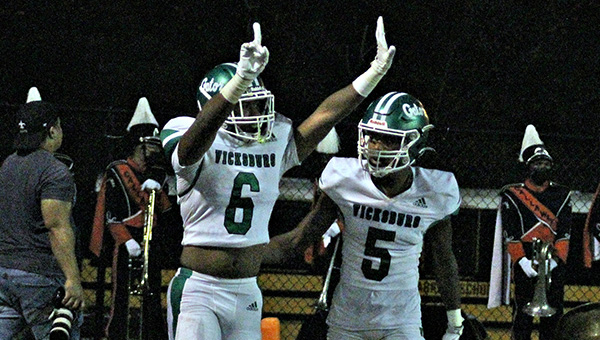 Several of them, in fact.

Fortunately, the offense had the defense’s bill covered.

Vicksburg (5-2, 5-0 MHSAA Region 2-5A) overcame 118 yards in penalties, the ejection of starting linebacker Demarion Robinson because of a controverisal targeting penalty, and giving up their first points in more than a month to win their fifth game in a row.

“I’m just happy that we stuck together. It was some tough times. We had a lot going against us, but we stuck together,” Vicksburg coach Todd McDaniel said. “We always talk about family and loving one another, and that’s what we did tonight. We can see that progress. Last year we would have fell completely apart. But you can see the progress of the team.”

With the victory, the Gators also clinched a playoff berth in everything but fact. They still need one more win, or either Canton or Holmes County Central to lose one more, to officially clinch. But Vicksburg would also have to lose its last three games and one of those two teams would have to win the rest of theirs for VHS not to get into the postseason.

“I’m elated at the progress, but I’m not going to be happy until the end of the year,” McDaniel said. “It’s only going to be one happy coach in 5A football, and I want to be that guy one day soon.”

Thursday’s game left plenty for McDaniel and the Gators to be both happy and mad about. In addition to the penalties, their streak of 20 consecutive quarters without allowing a point came to an end when Jamrion Bowling scored on a 13-yard pass reception early in the second quarter.

Callaway also scored on a 71-yard reception by Jeremy Scott, who finished with four receptions for 126 yards, and a 64-yard run.

Vicksburg’s streak included four shutouts and parts of two other games, and was its longest such streak since 1973.

“They have athletes. Those guys could fly. Hat’s off,” McDaniel said. “It had to end sooner or later, so now let’s start another one.”

By the time Bowling scored to put Callaway on the board, the Gators were already in control of the game.
Montgomery scored on runs of 2 and 1 yards in the first quarter, and added a 16-yarder in the second. Alexander hooked up with Tyler Henderson for a 60-yard touchdown pass in the second quarter as well, and the Gators led 28-12 at halftime.

Scott’s long touchdown catch cut it to 28-18 midway through the third quarter, but Vicksburg put the game away with a pair of fourth quarter scores. Collin Johnson scored on an 11-yard run and Alexander fired a 12-yard TD pass to Johnny Smith on fourth down with 4:19 remaining to ice it.

Johnson led the Gators with 71 rushing yards, one touchdown and a pair of two-point conversion runs on 12 carries. Montgomery had a team-high 13 carries, but only 42 yards to go with his three TDs.

Henderson caught four passes for 112 yards and a touchdown as the Gators opened up the passing game. Alexander completed 8 of 13 passes, and did not throw an interception.

“It was pretty fun. I like how we established our passing game. It spread the offense out. They were stacking the box and we just let it go,” Henderson said.

Six of Alexander’s eight completions went for 15 yards or more, and six resulted in either a first down or a touchdown. The other two were fourth down completions that came up short of the marker.

The passing game was key to the Gators’ output in the first half, when Alexander had 156 of his 198 yards. He only threw four passes in the second half as McDaniel elected to mostly run the ball and burn clock with a two-score lead.

“We got bogged down a little bit, but we had a nine-man front and I had to do a better job coaching, seeing guys wide open and sending guys on seams. You’re going to have to pick your poison. You can come to the line of scrimmage or we’re going to start throwing,” McDaniel said. “We came in wanting to do a few more formations. We wanted to get Ronnie going. We need to show people that Ronnie can throw the football.”