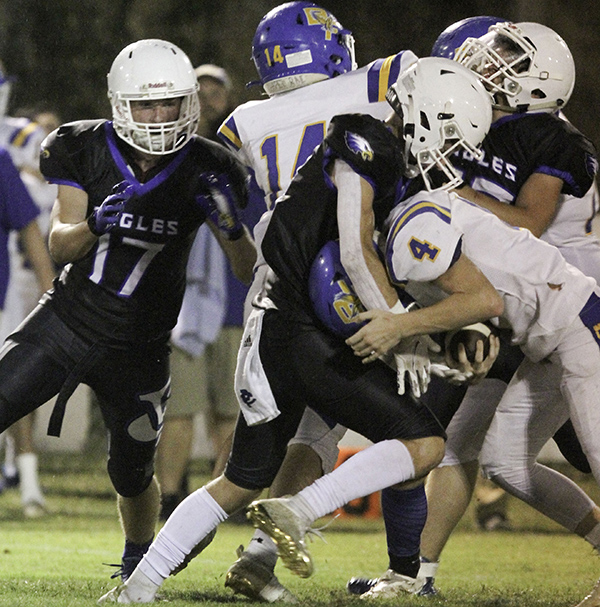 Part of the weekend duties for Porter’s Chapel Academy football coach Blake Purvis include looking over film, double-checking stats, and shifting gears to the next opponent on the schedule.

Last weekend, he added a new one to the list.

Purvis spent part of last weekend crunching numbers among the various MAIS Class 2A wild card contenders and plotting out playoff scenarios. That his team is not only involved, but still a major player as the season hits its home stretch, made it less a chore and very much a delight.

“It’s nice to sit here and do this,” Purvis said with a smile. “We are in what I think is a good spot to put ourselves in a great seed to move forward in the playoffs. There is a ton of stuff to play for.”

Despite a 70-18 shellacking at the hands of Prairie View Academy last week, Purvis’ Eagles are very much in the thick of the Class 2A playoff race.

They head into this Friday’s homecoming game against Prentiss Christian (3-4) ranked No. 8 in the power point standings that the MAIS uses to determine wild card teams and seeding. Twelve teams qualify for the postseason.

That means PCA (4-3) is playing not only to clinch its first playoff berth since 2014 over the final three weeks of the regular season, but also the right to host a playoff game for the first time since 2008.

“I think we’re probably pretty close to being in there. In MAIS you can’t really say you’ve clinched. They don’t have a metric for what it takes to clinch,” Purvis said. “We’re in a good spot, but we don’t want to be in there at 12. We want to get on up in the top half so we can host at least one and possibly two or three depending on what happens.”

PCA can also finish with a winning record for the first time since 2008 by winning two of its last three games.

“There’s a ton to play for,” Purvis said. “Our ultimate goal is to get to the playoffs and make a run at it. The winning record and all of that, those are just byproducts of what we want to accomplish.”

The home stretch begins against a Prentiss Christian squad that has won two games in a row following a three-game losing streak. The two victories came against Kemper Academy and Discovery Christian, a pair of struggling programs that have two wins between them — one of which came when they played each other, and the other from an early-season COVID forfeit.

Purvis, though, was not overlooking Prentiss Christian after PCA took it on the chin against undefeated Prairie View last week. The Spartans scored 60 of their 70 points in the first half.

Purvis said he liked the matchup with Prentiss Christian, provided his team is able to isolate last week’s game as a one-off debacle and not let its effects linger. Porter’s Chapel has not lost back-to-back games this season.

“We’ve learned quickly, we’ve made adjustments, we’ve fixed errors and mistakes and vulnerabilities and moved forward and had success the following week. We just have to get back to that plan and work hard this week.”