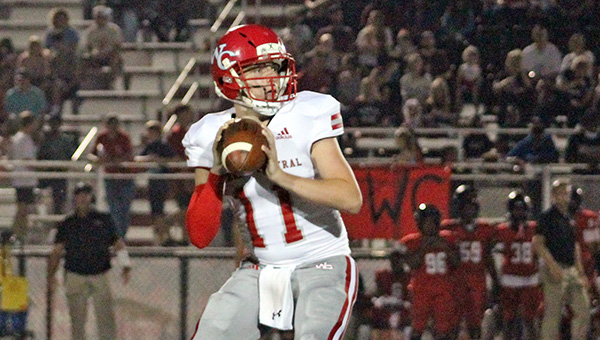 For the past nine years, Warren Central has fought, clawed and scrapped its way into the MHSAA Class 6A playoffs.

The Vikings are among three winless teams in Region 3-6A, following a pair of losses to Oak Grove and Brandon. It’s a deep hole to dig out of, and has made Friday’s homecoming game against Northwest Rankin (1-4, 1-1 Region 3-6A) — as well as nearly every game from here on out — a must-win.

“All of our focus is on our opponent and playing better, and that’s just the way it is. That’s all we can do,”

Warren Central coach Josh Morgan said. “It’s not hitting the reset button and panicking. We’ve got to hunker down and put everything in the proper perspective, and play better and be better in the areas we’ve not been good in the last two weeks in particular. We’ll take it this week at a time and re-evaluate it after this week.”

The Vikings’ 0-2 start in region play has stemmed from not only facing two quality opponents — Oak Grove and Brandon are both 2-0 in the league — but some uncharacteristically sloppy defense.

A team that allowed 30 points in its first three games combined surrendered 21 in the second half against Oak Grove and 31 in the first half of last week’s 38-20 loss to Brandon.

Morgan said inexperience and injuries have contributed to the struggles. There were only three returning defensive starters to begin with, and starting defensive end Anthonie Bullock suffered a season-ending knee injury in Week 1.

The result, Morgan said, has been a cascading effect throughout the defense that has created a number of problems.

“If your first level isn’t right, it usually leads to pressure and your linebackers facing gaps, and that leads into your secondary fits. When you’re playing defense, everything goes together. When something’s not right, it usually leads to more difficulties and more busts or bad angles. I think it’s all tied in there together,” Morgan said. “It all goes back to playing our positions, making sure we’re lined up the right way, and doing a better job of the little things. We’re inexperienced in some areas and we’re trying to find the right 11.”

It hasn’t been all bad for the Vikings (3-2, 0-2). The defense showed promise in three early wins, and the offense has moved the ball the past two weeks. Running back T.J. Thompson has rushed for 90 yards or more in three of the last four games, and the passing game has started to stretch the field.

Junior quarterback Jack Wright has completed six passes of 30 yards or more in the last two games, including two touchdowns and another that moved the ball to the 2-yard line.

“Last week we played really good on special teams. I thought our offense did some things really well. If we make some of those fourth down stops, or get a fumble that was on the ground, there were some opportunities there,” Morgan said. “We’re not far from being a really good football team.”

They are, however, running out of chances to show it. A loss to Northwest Rankin would drop the Vikings to 0-3 in Region 3-6A, and force them to have to win the rest of their games and likely get some help to make the playoffs. A victory Friday would keep them within striking distance with four games remaining.

Northwest Rankin, which reached the Class 6A semifinals last season, is in a similar position after struggling out of the gate.

“I think they played a really tough schedule in non-district, so you can’t base them off their win-loss record. They played for the South State championship last year and a lot of those guys are back,” Morgan said. “They’ll have two or three players that are hard to defend. It’s a different challenge every week, with another good opponent and good program, so we have another tough task in front of us.”

The clash of two teams needing a win, as well as the effort it’ll take to recover from the last two losses, has Morgan stressing the need to focus on one game at a time. The big picture, after all, is hard to see without focusing on this one small part of it first.

“All our attention is here. It doesn’t need to be anywhere else,” Morgan said. “We need to, number one, understand the situation, and we need to play better, too. Those are our two main focus points.”