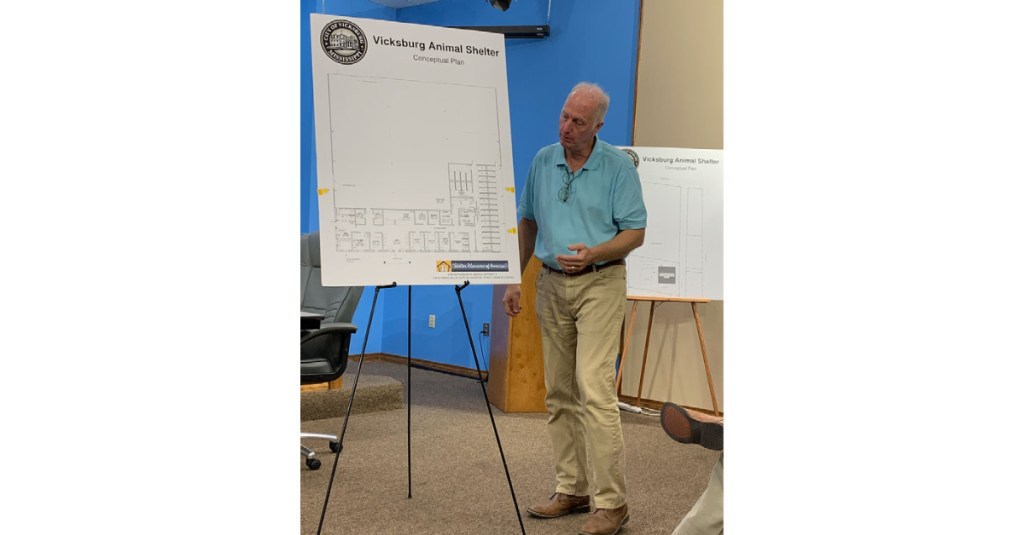 After years of debate and searching for the right location, Vicksburg is getting a new animal shelter.

The Board of Mayor and Aldermen on Friday approved a design for the shelter, which will be built at 4845 U.S. Highway 61 South. This property and the existing building that will be used for the shelter were donated by the Ernest Thomas family for the purpose of building the animal shelter.

The shelter’s design was presented at a news conference Thursday in the boardroom of the Robert M. Walker Building on Walnut Street.

Community Development Director Jeff Richardson said the next phase of the project involves signing a contract with Shelter Planners of America of Arlington, Texas, to prepare the plans and specifications for the project and letting it out for bid.

“After discussion, comments and working with different people on the animal shelter, they (Shelter Planners of America) have brought forth a conceptual design of the site and the actual animal shelter,” South Ward Alderman Alex Monsour said. “All of the issues there have been addressed.”

He said the board is looking at ways to fund the project without raising property taxes.

“We looked at eight different sites,” North Ward Alderman Michael Mayfield said. “In the end, you do what you have to do. I think this design is pretty well put together. We’re at that point where we’re going to have to move forward from here. There’ll probably be some more discussion. We’ll move on from here and see what happens.”

City officials have been considering a new animal shelter for several years. The present shelter is almost 50 years old and sits on a tract of land on Old Mill Road adjacent to the Vicksburg Fire Department’s training center, in the Kings community.

On Feb. 21, 2020, Flaggs, other city officials and city resident Marilyn Terry, who provided a recommendation for a shelter building, toured the former U.S. Rubber Reclaiming plant off U.S. 61 South, which is owned by the city and located in a flood zone, and the Oak Street site in the 2100 block of Oak Street south of Depot Street.

Problems with the Oak Street property forced city officials to remove the site from consideration. In August, the board considered a 14.3-acre tract at 4211 Rifle Range Road owned by Cappaert Holdings LLP but the city was unable to afford the $1.5 million to buy the land and build the shelter.

The Thomas family offered to donate the property and metal building on U.S. 61 South in September.