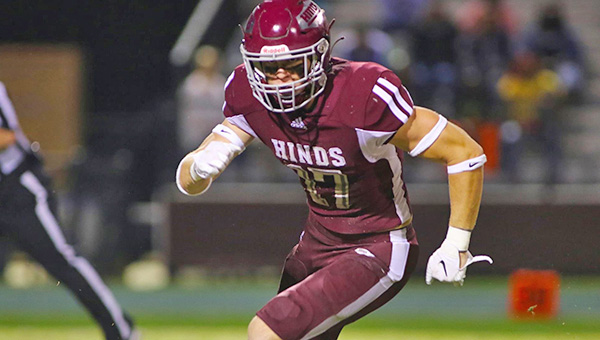 RAYMOND — After slugging it out with Copiah-Lincoln for three quarters Thursday night, Hinds Community College finally put it all together in the fourth.

Jamarian Samuels and Jeffrey Pittman each ran for short touchdowns in the final five minutes, on scoring drives set up by a blocked punt and an interception, and Hinds pulled away from Co-Lin for a 23-14 victory.

Pittman finished with 110 yards and two touchdowns for Hinds (4-2, 2-1 MACCC South), which won for the fourth time in five games.

Nick Lauderdale recovered a fumbled punt early in the game, and then blocked another put in the fourth quarter to set up Samuels’ 3-yard TD with 4:43 to go. On Co-Lin’s next drive, Thaddeus Bishop intercepted a pass at the 24-yard line to set up Pittman’s TD that made it 23-8.

Co-Lin got one score back on a 24-yard touchdown pass from Paul Hargrave to Erick Rogers, but Hinds recovered the ensuing onside kick and ran out the clock.

Hargrave finished 23-of-41 passing for 235 yards, with one touchdown and one interception. Tyquan Henderson caught 11 passes for 135 yards.

Hinds will return to action Oct. 14 at 6:30 p.m., on the road at Southwest Mississippi.

Pearl River 55, Holmes 7
Pearl River (2-4) set a school record with 534 rushing yards and had its biggest margin of victory since 2006 in a lopsided homecoming win over Holmes Community College.

Tony Brown led Pearl River’s onslaught by rushing for 229 yards and four touchdowns on only 10 carries. Nick Milsap added 167 yards and quarterback Will Young had 70 yards.

Young only threw two passes in the game, completing one for a 30-yard touchdown to Antonio Gayden late in the first half.

Holmes (0-6) has allowed 41 points or more in every game this season.

Short completed 15 of 30 passes for 171 yards and three touchdowns. He tossed a 35-yard TD pass to Micah McGowan midway through the third quarter to put Gulf Coast ahead 14-10, and then a 5-yarder to Rico Dorsey in the opening minute of the fourth quarter.

Gulf Coast iced the game with a 32-yard field goal by Dylan Wasson with 3:29 remaining and a 45-yard interception return TD by Jashon Baker on the next play from scrimmage.

Cam Thomas carried the ball 33 times for 183 yards for Gulf Coast, and McGowan had 70 total yards to go along with his one touchdown.

Sheffield caught touchdown passes covering 92 and 82 yards, and finished with four receptions for 202 yards. Hiers’ other long TD pass was a 70-yarder to Jaquerrious Williams late in the first half that put Northwest Mississippi ahead 35-6.

Hiers finished 14-of-18 passing for 365 yards. Williams had 106 rushing yards and two touchdowns to go with his long receiving TD.