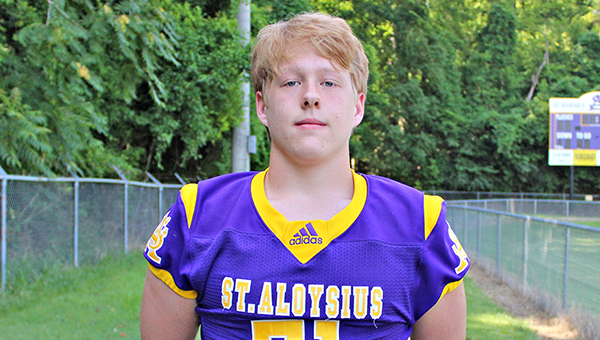 St. Aloysius' Thomas Dowe returned a fumble 72 yards for the Flashes' only touchdown in a 38-8 loss to Copiah Academy on Friday.

Facing a very good Copiah Academy turned out to less of a challenge for St. Aloysius and more of a buzzkill.

Wyatt Albright and J.D. Weed scored two touchdowns apiece, and Copiah scored all of its points in the first half en route to a 38-8 win over St. Al on Friday night.

“It was not fun,” St. Al coach Bubba Nettles said. “But they’re a 5A school and their only loss was to 6A Jackson Prep. Losing to them is not bad, but I just hate losing.”

Things went sideways early for St. Al. Copiah (6-2) took the opening kickoff and scored on a 1-yard quarterback sneak by Albright with 8:05 left in the first quarter.

St. Al then gave up nine points in a matter of seconds. A bad punt snap sailed through the end zone for a safety, and Albright returned the ensuing free kick 65 yards for a touchdown and a 17-0 lead.

Weed finished a big first quarter for the Colonels with a 57-yard touchdown run with 2:33 remaining to make it 24-0.

Weed also had a 40-yard touchdown run in the second quarter and finished with 139 rushing yards on only nine carries.

Albright had 64 rushing yards for Copiah and Jamarius Grayer had 58 yards and a touchdown. Copiah totaled 275 rushing yards.

“We lost some kids early and it snowballed,” Nettles said. “I call it falling off into quicksand. The more we struggled, it only made it worse.”

St. Al finished with 65 yards of offense. Padre gray rushed for 40 yards, and also had an interception of defense, while Carson Smith was 7-of-14 passing for 62 yards.

St. Al’s touchdown came midway through the fourth quarter, when Thomas Dowe returned a fumble 72 yards. Thomas Fortenberry ran it in for the two-point conversion.

“The kids played hard, which is all a coach can ask for. If one went down, another was willing to step up,” Nettles said. “They had each other’s back. Unfortunately, it was a battle we couldn’t win.”