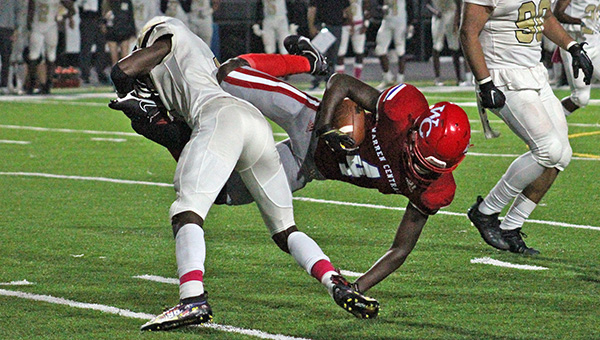 Warren Central’s new region is turning out to be a less than hospitable place. Of course, the Vikings are not doing a whole lot to make themselves comfortable there.

Jalen Nelson threw for 213 yards and three touchdowns, and Northwest Rankin used a never-ending string of third-down conversions and two key fumbles to beat the Vikings 30-20 on Friday night.

Northwest Rankin converted 11 of 15 third down chances in the game, including two that resulted in touchdowns, and scored on five of its first six possessions.

“It was the same story. First half, we had every opportunity to be in the lead. There’s stuff that you just can’t do, and we did it all,” Warren Central coach Josh Morgan said. “All three of their touchdowns were in third down and long situations where we had guys there. We just didn’t make the plays. It’s not just one person, it’s us as a defensive unit. It’s missed opportunities. And offensively we had a couple of fumbles. That’s a recipe for disaster against anybody.”

Warren Central (3-3, 0-3 MHSAA Region 3-6A) has lost three consecutive region games for the first time since 2011. The losing streak has put it in a deep hole in its quest to reach the Class 6A playoffs for a 10th consecutive season.

“All that I know to do is head down and go to work. That’s what we plan on doing,” Morgan said.
Warren Central and Northwest Rankin traded touchdowns on their opening possessions, but then Northwest took control by scoring three straight times.

Ken Reed capped a 16-play, 8-minute drive with a 12-yard TD run, and then Nelson hit Caleb McCoy for a 44-yard touchdown and Brendan Brown for a 17-yard score. The latter two drives were both set up by Warren Central fumbles inside Cougar territory, and put Northwest Rankin ahead 27-7 at halftime.

“As bad as we were playing defensively, we needed to score with them,” Morgan said. “It felt like we were running the ball and having some success there, and those two fumbles hurt. That’s your only hope is that we can score with them until we get settled down defensively, and we turned the ball over and it was kind of like a double whammy.”

Warren Central finally answered by taking the second half kickoff and driving down the field for a touchdown. T.J. Thompson capped the 10-play march with an 18-yard run with 7:31 left in the third quarter.

Northwest Rankin, though, came back with an 18-play, 73-yard drive that resulted in a 27-yard field goal by Christian Baglione for a 30-14 lead. The drive stretched into the fourth quarter and took nearly 10 minutes off the clock. The Cougars converted four of five third downs along the way.

“Having (Nelson) at quarterback and being an athlete, he poses that run and pass threat that allows you to open some things up,” Northwest Rankin coach Devin Cooper said of his team’s third down success. “But mainly execution across the board by a lot of players. That’s what you’ve got to do to win a 6A game.”

Thompson caught a 33-yard touchdown pass from Jack Wright on Warren Central’s next possession to cut it to 30-20. A successful two-point conversion was wiped out because of an illegal shift penalty, however, and the second try was no good. It was one of many self-inflicted wounds the Vikings had.

Their next drive ended with a punt after two runs and a false start put them in a fourth-and-21 situation with 3 1/2 minutes left. Northwest Rankin then converted a key second down that allowed them to take the clock down to a minute before they turned it over on downs with a 10-point lead.

The Vikings also dropped two interceptions in the first half that could have blunted the effect of its fumbles.

“There’s no one thing you can point your finger at. It’s the collective effort,” Morgan said. “We’ve been our own worst enemy. Going into the game, we felt like we had a good plan. Whether it’s not executing or missing, we’re allowing other people to make plays and we’re not. We’ve got to make plays to win. It’s all about making plays, and we are not making plays, specifically on third downs.”