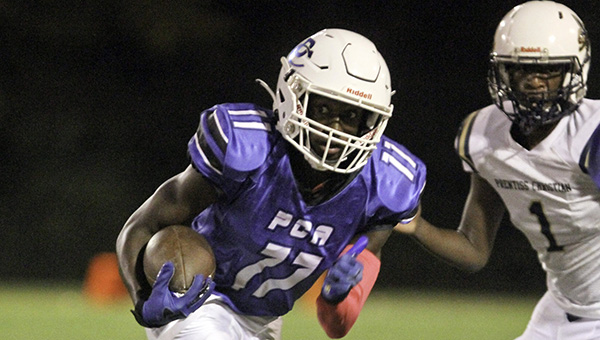 “It’s huge. We knew going into the back third of our schedule they were going to be must-win games, so getting a win is a huge thing,” PCA coach Blake Purvis said. “We gave ourselves a chance to get that win early tonight.”

Porter’s Chapel got on the board early in the first quarter with a safety, and then scored on a touchdown pass from Riggs to Thomas Azlin. Willie Rogers returned a punt for another touchdown midway through the period to put the Eagles ahead 18-0.

Washington then scored on a runs of 51 and 81 yards before halftime as PCA continued to pile it on and led 34-8 at the break.

“It’s huge to pick up a non-offensive touchdown. It’s been several weeks since we scored one, so having success in all three phases of the game, you can’t ask for a better start.”

PCA finished its scoring in the second half with a 19-yard touchdown run by Jase Jung, and a touchdown reception by Rogers.

Rogers finished the game with six catches for 56 yards and a touchdown, the punt return TD, and four tackles and one interception on defense.

Washington had most of his yardage on the two big runs, but helped the Eagles keep control of the game, Purvis said.

“He wasn’t having big runs all night. When the holes were there, he turned in some explosive plays,” Purvis said. “Had four runs of 20 yards or more and the rest were hard yards.”