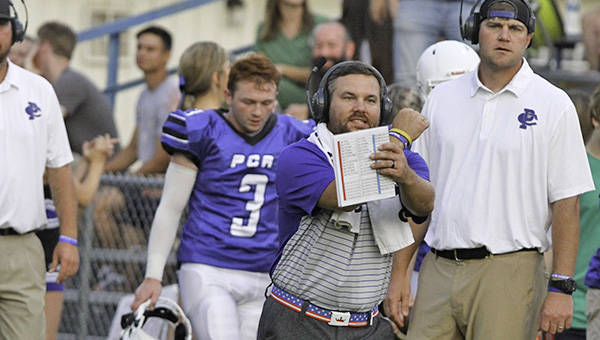 Porter's Chapel Academy football coach Blake Purvis walks the sideline during a game earlier this season. Purvis and the Eagles are closing in on their first playoff appearance since 2014. (Paul Ingram/For The Vicksburg Post)

In two weeks, and with two consecutive wins, St. Aloysius went from staring a winless season in the face to plotting out playoff scenarios.

Porter’s Chapel Academy had its district championship hopes squashed like a bug with a 52-point loss, but is still in the running to host a first-round playoff game.

These odd scenarios are brought to you courtesy of the Mid-South Association of Independent Schools’ power points system, which it uses to fill out its football playoff brackets. The system can be a confusing mess for the uninitiated, so as we hit the final few weeks of the regular season it seemed helpful to offer a refresher course on how it works and what it means for our local teams.

In the MAIS, 12 teams qualify for the postseason in Class 1A through 5A. The top three or four seeds are reserved for district champions, and the rest are selected and seeded as wild cards based on the association’s power point rankings.

The formula gives points to each team in three ways — a set number based on the classification of the opponent; 16 points for winning the game; and one point for every win or open date that the opponent has.

The second component of the formula rewards teams for winning, while the first and third work to reward those that play more difficult schedules.

Each team’s total is divided by the number of games they’ve played against other MAIS teams to come up with an average. The result is then used to rank the teams in each classification and seed them in the playoff bracket.

Seems simple enough, right? Well, it is — until you start trying to figure up the various scenarios for each team.

Solving the different possibilities requires an engineering degree, one or two of the Cray supercomputers that ERDC uses, and the imagination of a Marvel Cinematic Universe writer to ponder the multiverse.

Because of the strength of schedule components in the formula, nearly every game in the MAIS means something to someone. It gets a bit easier as the season winds down, but an otherwise meaningless game between an 0-9 team and a 2-7 team could be what puts a third team into the playoffs. It also creates strange bedfellows, as bitter rivals like St. Aloysius and Cathedral start rooting for each other to win and boost each other’s average.

The strength of schedule component is how St. Aloysius, which won back-to-back games after an 0-5 start, is suddenly in the mix to sneak into the back end of the Class 4A bracket. It has played a very difficult schedule, and every win by one of its opponents is as crucial as one of its own. The Flashes probably need at least one victory in their last three games to get in, but have a good chance.

Porter’s Chapel, meanwhile, lost its first two district games by 46 and 52 points but still has a 4-3 overall record and a 16.143 power point average that is eighth in Class 2A.

The Eagles likely need one more win as well to shore up a spot, but are in good shape to earn a wild card and end a seven-year playoff drought. If they can stay at No. 8 or above, they’ll also host a first-round game on Oct. 29.

The one constant in the formula, of course, is for both teams to keep on winning. That solves everything. But as the MAIS season winds down, it’s important to look not only at their results but the big picture as well. You never know who might become your friend, or how the final equation will shake out.