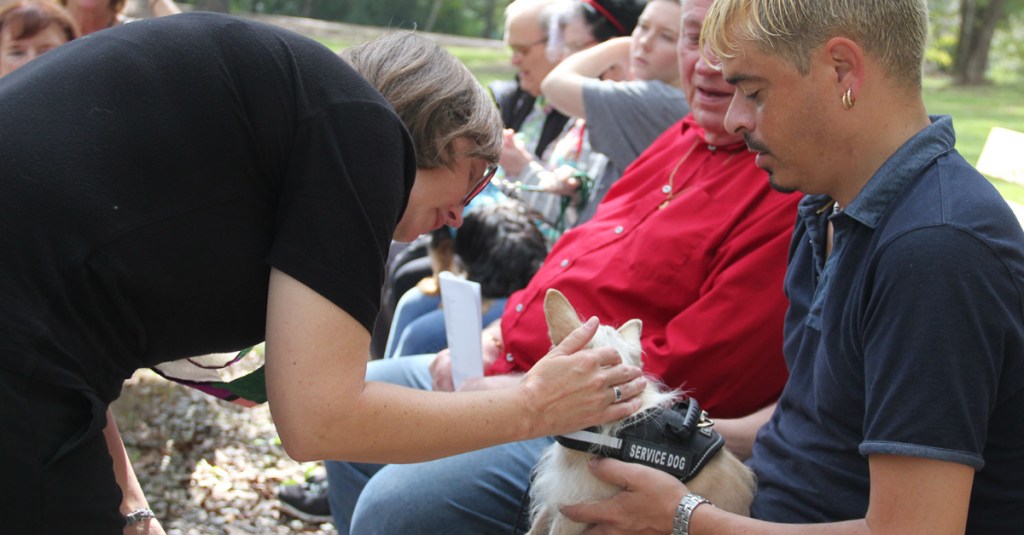 On the afternoon of Oct. 3, pet owners brought their animal friends to St. Paul Catholic Church and St. Alban’s Episcopal Church for a time-honored tradition of the blessing of the pets, which is observed worldwide in honor of the feast day of St. Francis of Assisi.

“We celebrated St. Francis on Sunday,” said the Rev. Elisabeth Malphurs, the priest in charge of St. Alban’s Episcopal Church in Bovina. “We had two services; we had 15 people at the 8:30 a.m. service and 45 at our 11 o’clock service, not counting our four-legged friends.

“We had mostly dogs. We had three cats and then we had a little turtle show up in the middle of the service under one of the pews in the outdoor chapel. Monday, we had a very large pig show up at the church for his blessing.”

St. Paul Catholic Church had its blessing of the pets service that Sunday afternoon in front of the church.

The founder of the Franciscan Order, St. Francis was born in the 12th century in Italy and is known as the patron saint of animals. His feast day is observed on Oct. 4, and many religions that observe the blessing of pets hold the service the Sunday before his feast day.

According to the Encyclopedia Britannica, St. Francis was the son of a well-to-do cloth merchant but after a religious conversion, he left behind his old life to preach and to live in accordance with the Gospel. He died on Oct. 3, 1226, in Assisi and was canonized on July 16, 1228.

Besides the Franciscans, he founded the Order of St. Clare or Poor Clares, and the lay Third Order.

He was also a leader of the movement of evangelical poverty in the early 13th century. His evangelical zeal, consecration to poverty, charity and personal charisma drew thousands of followers. Francis’s devotion to the human Jesus and his desire to follow Jesus’ example reflected and reinforced important developments in medieval spirituality.

St. Francis considered all nature as the mirror of God and as so many steps to God. He called all creatures his brothers and sisters and preached to the birds and persuaded a wolf to stop attacking the people of the town of Gubbio and their livestock if the townspeople agreed to feed the wolf.