Warren County Sheriff Martin Pace said Nicholas Seth Alexander, 20, died after his westbound 2008 Toyota Tacoma pickup left the road in a curve on the 3900 block of Tiffentown Road. Alexander struck several trees and apparently overturned several times. He was not restrained and was ejected from the vehicle.

Alexander, a Pascagoula native, was pronounced dead at the scene by Warren County Coroner Doug Huskey. 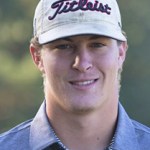 Alexander was a member of the golf team at Hinds Community College. He graduated from Pascagoula High School in 2019 and was currently in his sophomore season at Hinds.

“Seth had as much excitement with his teammates’ success as he did his own,” Hinds interim head golf coach Chad Davis said in a statement. “Seth was a ‘team first’ gentleman and was just sincerely a genuinely nice and pleasant kid. He will be missed by so many friends and family.”

The wreck remains under investigation by Deputy Robert Jackson, Pace said, adding the preliminary investigation indicated that speed appeared to be a factor.

“Our thoughts and prayers go out to Seth’s family during this time of profound loss,”  Dr. Stephen Vacik, president of Hinds Community College, said in a statement. “We cannot fully comprehend what they are feeling, but the entire Hinds CC family grieves with them. And Seth will forever remain a member of the Hinds family.”

Alexander’s death was the second in less than a month involving a Mississippi junior college athlete. On Sept. 24, Mississippi Gulf Coast Community College freshman football player Levi Madison was killed in a car wreck in Wiggins.