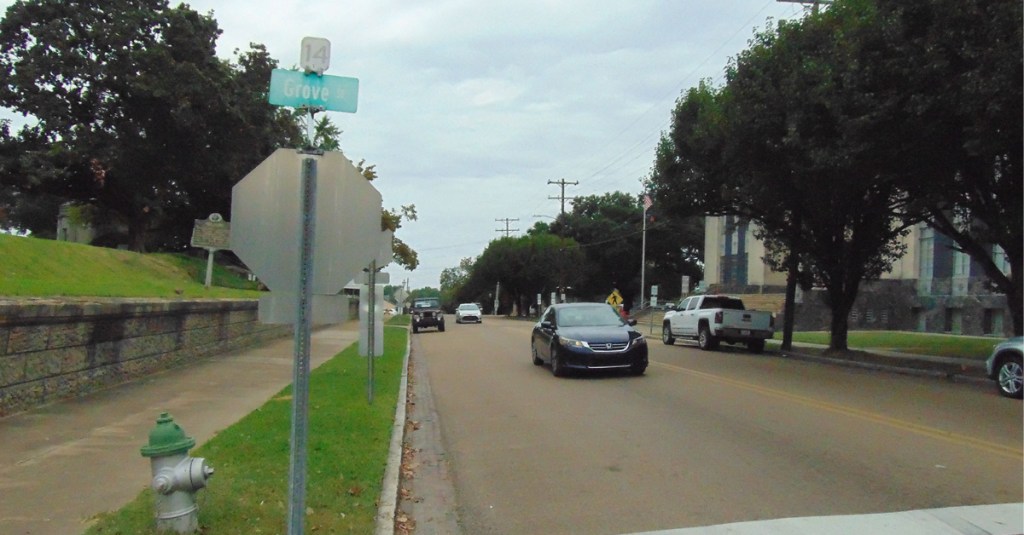 Cars approach the intersection of Grove and Cherry streets in Vicksburg. Grove Street, from its intersection with Chery to First North Street, will be paved under a proposed $4 million paving project for the city. (Photo by John Surratt)

A total of 42 streets in Vicksburg’s North and South wards would be paved under a proposed $4 million paving program funded by a recently approved $11 million capital improvements bond issue.

No date has been set for the work, which would involve paving all or part of 10 South Ward streets and 32 streets in the North Ward, to begin, Mayor George Flaggs Jr. said.

“I’m just getting all the information,” he said.

The board discussed paving at a Monday work session that also included a presentation of a $245,000 comprehensive paving study by Waggoner Engineering president Emad Al-Turk that would use lasers to determine and update the condition of city streets, including below the surface, set a priority list and give an estimate to do the work.

No action was taken on the study, but board members indicated it would be discussed again at a later date. The board, however, was concerned about doing another paving study.

“We’ve done two studies,” Van Norman said. “Are we going to do a third study?”

Mayfield said according to Al-Turk, the last study is now out of date.

“I’ve looked at it and it’s obsolete,” Monsour said. “We either need to move forward and get the data we need and get ready for these roads or remain obsolete.”

Flaggs said the present study was provided to help the board make paving decisions, “But rather than going back to the study, this Board of Mayor and Aldermen, including me, took the study and put it aside and politicized it and (paved the roads) not in the order in which the study had provided,” he said. “If you had taken that study and utilized that study’s recommendation every time and then got an engineer to assess every time, you wouldn’t be in this problem today.”

Flaggs said Waggoner’s proposed study “is a more scientific way of doing things and he said he can do it for you for $245,000 and have it in 125 days. Even if you do that, you’re going to have to hire an engineer to assess what he’s just done. Bottom line.”

“I can’t continue to pay for studies that are going to become a dust pile,” Flaggs said after the meeting. “We’ve got to come to some effective means of repaving and prioritizing streets and not politicizing the repaving of the streets.

“That’s what we’re doing now. We’re getting studies we don’t use because we adhere to the politics of the street,” he said. “We’ve got to get away from that. We’ve got to get to the streets that truly need it based on priority.”

While the Waggoner study would be more comprehensive, Flaggs said it was also expensive.

“It doesn’t make sense for us to keep on burying money into those studies and then turn around and alter the priority of the streets,” he said.

Mayfield and Monsour said they were not politicizing the paving.

“I have never once since I’ve been in public office paved a street that was not blessed first by the engineer,” Mayfield said.

“I don’t make the final decision on streets to be paved,” he said, adding he relies on Van Norman’s advice. “I take a whipping over it. You cannot play politics; before I pave a street, I’m going to make doggone sure the city engineer has looked at that street and given me his assessment.”

Monsour said he received criticism in the South Ward for paving the Halls Ferry-South Frontage Road-Pemberton Boulevard intersection instead of neighborhood streets.

“I did it because it’s the main route to where people shop and it needed the work,” he said.

Outlining the problems with bayous, underground springs, flooding and erosion affecting streets in the North Ward, Mayfield said, “We try to make the best decisions that we can to affect the mass of people in what you do. When you start paving, you can make enemies real quick; you never know what you’re going to run into.”

Discussing problems in the past where damaged subsurface utilities have increased the cost of paving projects, Mayfield said the board needs to take a look at the Waggoner proposal.

Monsour said the paving study will give the board information on all city streets and provide more detail than previous studies.

“It’s not only going to be the roads that need to be done and the priority; it’s also going to have a cost analysis with it so it’s not going to be a guessing game with us and it’s going to give a five-year outlook on what you’re going to have to do on your streets and roads,” he said.

“If the study will show how to improve the streets “and not be political about it but just working off the information then yes, I believe it’s worth it and I think there’s a way to pay for it without taking it out of the general fund,” Monsour said.