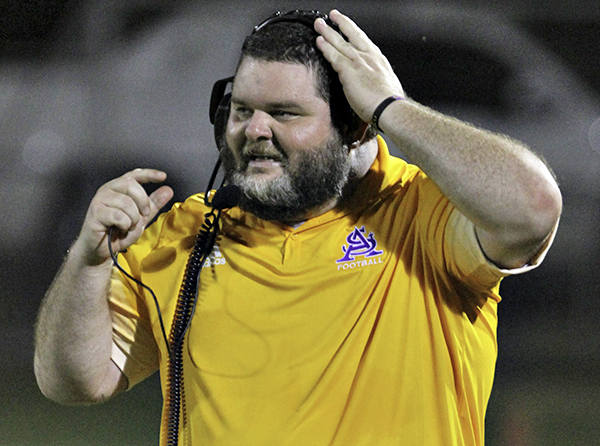 The news from St. Aloysius’ this week was a mixed bag of bad and good. While there were plenty of negatives following a lopsided loss to Copiah Academy, there were also plenty of reasons to remain optimistic.

Good news: Thanks to the nuances of the MAIS power point system, they actually improved their playoff standing.

Good news: The last two games will actually be meaningful, and if the Flashes can win one they will almost certainly clinch a playoff berth.

“Even after our loss last week, we are sitting at 12. Our power points even went up, which is crazy,” St. Al coach Bubba Nettles said. “It is a crazy system, but it rewards playing a difficult schedule. There’s ways to get in that don’t involve having to run the table. We win and we’re in. That’s it.”

All the Flashes (2-6) have to do to win is beat one of the MAIS’ most dominant programs of recent years, Greenville-St. Joseph (6-1), when the teams play Friday night in Greenville. Or another team with a similar pedigree, Tri-County (7-1), in next week’s regular-season finale at home.

Either game is a difficult assignment, but Nettles said he’s happy to have it. St. Al started the season with a five-game losing streak, then won two in a row to resurrect its postseason hopes. Just being able to talk about playoff scenarios after such a difficult stretch was a testament to his players’ attitudes, he said.

“It’s wonderful to still have that to play for. All that credit goes to the kids and their resiliency,” Nettles said. “I’ve coached in this area for 11 or 12 years now, and I’ve coached really great football players. But these kids, as a collective group, starting back from last year, really impressed me with their ability to never give up. They fight and fight and fight. There’s no give-up in them. For us to be in the position we’re in, to even consider the possibility of being in the playoffs, is on them.”

Greenville-St. Joe won three consecutive state championships from 2017-19 and reached the Class 3A semifinals in 2020. The Irish moved up to Class 4A this season but have not taken a step back.

They’ve clinched the District 2-4A championship and a first-round bye in the playoffs, and their only loss was to perennial Class 6A power Jackson Prep in early September. St. Joe has won five in a row since then.

“They have athletes all over the field,” Nettles said. “One of their defensive ends is about 6-5 and he also doubles as their star wide receiver. Their quarterback is tall, lanky and can run. He wants to throw it, so we have to make sure we keep him corralled to the pocket and force him to throw it. We have our hands full this week, I assure you.”

The key to pulling off the upset, Nettles said, will be for the Flashes to do what they’ve done well when things have clicked this season — run the ball, control the clock, and limit St. Joe’s scoring opportunities.

Running back Padre Gray has nearly 500 rushing yards in the last three games, and even though the score was lopsided St. Al did force two turnovers in last week’s loss to Copiah Academy. One was a fumble that Thomas Dowe returned for a 72-yard touchdown.

“If we continue to ground and pound, that’s going to be big for us this week. To slow the pace of the game down, because they’re kind of a high-paced team,” Nettles said. “For us to be able to advance the ball down the field, even if it’s three or four yards at a time, I don’t care. A 20-play drive that ends in points is as successful as a one-play drive that ends in points. It’s no difference to me. We have to make sure we get back to what we do great, which is run the ball and play pretty good defense.”