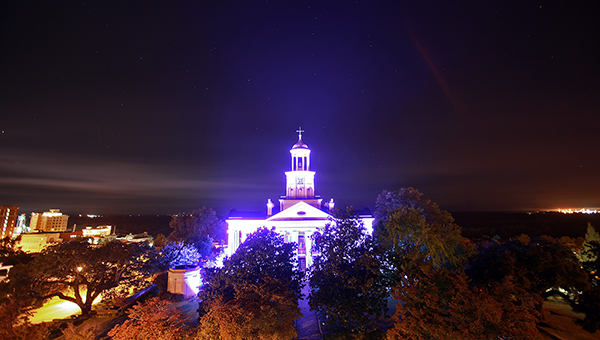 Thank heaven for Haven House — a safe place established in Warren County in 1985 for families seeking shelter from family violence.

October is Domestic Violence Awareness Month, a time to help support the growing awareness of abuse and to honor survivors, some of whom have sought out refuge at the Haven House Family Shelter.

A purple ribbon is worn in observance of the cause.

Nearly 20 people per minute are physically abused by an intimate partner in the U.S., the National Coalition Against Domestic Violence website stated. Those numbers represent abuse to both males and females from all ethnic and socioeconomic backgrounds.

Krystal Hamlin, who is the Haven House outreach coordinator, said in addition to physical abuse, domestic violence can include verbal, psychological, financial and religious abuse as well as dating abuse.

“Dating abuse is a pattern of behaviors used by the partner to maintain power and control over another person,” Hamlin said.

Municipal Court has a dedicated docket the second and fourth Tuesdays of each month for domestic violence cases. Haven House staff are in attendance at the proceedings, Hamlin said, to provide crisis counseling for victims in the court setting.

Haven House, although located in Warren County, assists residents from all over the state of Mississippi. The organization’s primary areas of service are in Warren, Sharkey, Issaquena, Yazoo, Hinds, Madison, Rankin and Simpson counties.

“We also assist residents out of state when there is a safety concern where they are located,” Tillotson said.

Approximately 75 to 90 residents are served annually at Haven House. The average stay is between three and four months.

“Residents can remain at the shelter for as long as necessary for them to reach their goals,” Tillotson said.

Tillotson said some residents seek shelter at Haven House multiple times. It can take time for a male or female to make the decision to leave his or her abuser permanently.

In addition to Tillotson, the staff at Haven House includes an executive director; financial manager; a shelter services coordinator who ensures all supplies the shelter needs are available; a case manager who aids residents in goal setting, budgeting and obtaining any services they need; a counselor; a cook to provide meals; a childcare worker whose services are free to residents who work or have to attend to necessary business; residential aides who provide necessary support to the shelter on nights, holidays and weekends; and Hamlin, whose job includes providing court advocacy and support, and to educate the community about domestic violence.

“Haven House is part of the Beverly Prentiss Victims Empowerment Program Team, which allows us to work closely with local law enforcement. Many times, when there is a domestic disturbance, the officers will inform the victim about Haven House and ask if they would like for them to call,” Hamlin said.

Victims of domestic violence can reach out directly to Haven House on its 24-hour crisis line at 601-638-0555.

All staff is trained in trauma informed care, Hamlin said. Advocates with the shelter can assist victims in creating a safety plan that can be put into action if they decide to leave the situation or if violence occurs again.

If contacting Haven House, Hamlin said, it is important for a victim to be in a “free and safe environment” where they can provide information about their situation.

When a victim arrives at Haven House, Tillotson said, “They are greeted by staff and are shown to their rooms.”

After they are settled in, she said, they begin meetings with the case manager to begin goal setting. Case managers also aid residents in obtaining social services, medical care if needed, and finding employment.

Residents are allowed to bring their children to the shelter and if school age can maintain their enrollment if enrolled in a Warren County school, Tillotson said. If they are not enrolled in a local school, she said, a staff person at Haven House can assist in helping them get enrolled.

For children who are not school age, Tillotson said, free daycare is provided at the shelter.

As of Oct. 1, all domestic violence shelters lost funding from Victims of Crime Act (VOCA) federal grants, which send money to direct assistance programs for victims and survivors of all types of crimes in Mississippi.

This was reported on a WLBT broadcast Oct. 12.

Courtney Ann Jackson, who is a reporter with the news station, spoke with several shelter directors, one of which was Haven House Executive Director Georgia Grodowitz.

Domestic violence cases have risen in the U.S. by 8.1 percent during the pandemic, therefore the funding cuts will affect those needing to seek a safe haven from abuse. Mahoney said she is hopeful state lawmakers will find a way to direct emergency funds to the Mississippi shelters.

A request from the Speaker and Lieutenant Governor to the Governor included emergency funding for the issue, Jackson reported, but no announcement has been made regarding a special session that would address the situation.