Home playoff game, shot at region championship on the line for Gators 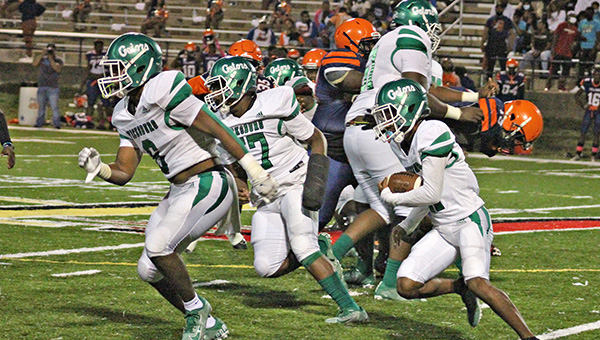 Vicksburg High running back Collin Johnson, right, follows his blockers for a gain against Callaway. Johnson had 71 yards and a touchdown in the Gators' 44-18 victory. Vicksburg will host Ridgeland on Friday night. (Ernest Bowker/The Vicksburg Post)

For five weeks, the Vicksburg Gators have been splashing around in the shallow end of the Region 2-5A pool. Now it’s time to head into the deep water.

The Gators (5-2, 5-0 Region 2-5A) host Ridgeland (4-2, 3-1) on Friday night in the program’s biggest regular-season game in a generation. With a victory, Vicksburg would clinch a home playoff game for the first time since 2008 and earn the right to play for the region title next week.

It’s the start of the regular-season home stretch, with the stakes ratcheting up each week and the opportunity to reach heights the program has rarely achieved. Vicksburg has only won three region championships since the MHSAA playoff system began in 1981, with the last coming in 1990.

“They definitely know what’s at stake. They know this is a big game. Most of all, we want to protect The Swamp,” Vicksburg coach Todd McDaniel said. “It’s all a process. These kids have never been in this situation before and now it’s time to start learning. We went to the playoffs last year but we didn’t get the results we wanted. This is a step forward. We want to make sure we’re competing for a district championship after Friday.”

Vicksburg’s rise to the top half of Region 2-5A has been remarkable and swift. A youth movement that started in the second half of 2020 has borne fruit this year, with a core group of talented sophomores and juniors leading a massive turnaround from a 2-8 record.

Since going 9-4 in 2017, the Gators have not had a winning season. They can clinch that milestone with a victory Friday, as well as ensure they won’t finish worse than second in the region.

Beating Ridgeland would set up a showdown with Neshoba Central next Friday night for the Region 2-5A championship. That is a scenario the Gators have not had since 2003, when they started 6-0 in region play before losing to Warren Central in the regular-season finale.

“It feels great to be in this position, especially to come from where we came from last year,” McDaniel said. “We just want to come out and make the city proud, make our mothers and fathers proud, and most of all come out here and show the work we’ve been putting in. It’s great to be in this position. We’re going to treat every game from this point forward like it’s a playoff game.”

The Gators’ first five region wins have come against teams with a combined 8-24 record. Ridgeland and then Neshoba Central will be a considerable step up in competition.

Ridgeland won four of its first give games before losing 42-35 to Neshoba Central last week. The Titans also played for the Class 5A North State championship last season and reached the second round of the playoffs in 2019.

Senior quarterback Thomas Dyess (1,583 passing yards, 15 touchdowns, six interceptions) has kept the Titans rolling, but McDaniel thinks his team matches up better this time than in 2020 when Ridgeland beat Vicksburg 49-32.

“They’re a pretty good football team. They have some dynamic players on the perimeter, but so do we. We have big corners, big safeties and a very well-coached secondary and defense,” McDaniel said. “We just want to come out here and make sure we run to the football and limit big plays, and don’t turn the ball over and put them in good situations. We just want to make sure we come out here and play Gator football.”

Vicksburg is coming off a 44-18 win over Callaway in its last outing. It was an uneven effort, with the defense giving up several big plays and the team fighting through 118 yards in penalties.

McDaniel was grateful for it.

Vicksburg had posted four consecutive shutouts and not allowed a touchdown in 20 quarters before Callaway scored early in the second quarter. Having to work through some adversity, McDaniel said, was a welcome reminder that things will not always be as easy or go as well as they had for the previous month.

“It was great for us to see things not go our way for a change, and to be able to overcome and fight through it,” McDaniel said. “That’s part of growing up as a team. We’re still a young football team, but we’ve found some success and want to continue success.”