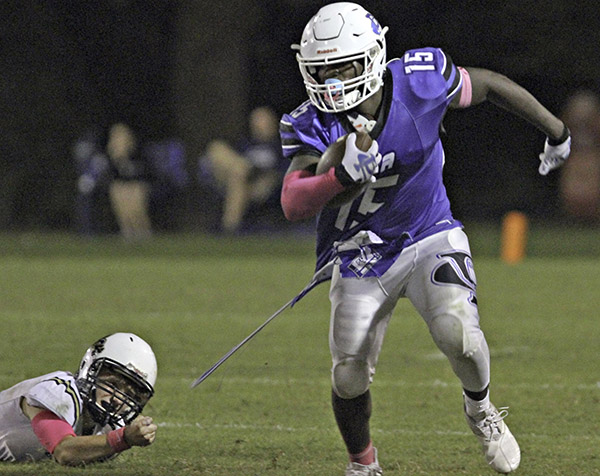 A Prentiss Christian defender hangs on to a scrap of jersey of Porter's Chapel Academy running back Tyler Washington (15). PCA will head to Gulfport on Friday to face Christian Collegiate Academy. (Paul Ingram/For The Vicksburg Post)

Porter’s Chapel Academy downsized this season when it switched from 11- to 8-man football. On Friday night, it’ll take it a step further.

PCA coach Blake Purvis said the different dimensions will be among many unique things his team will have to deal with as they chase a victory.

“There will probably be a little shock factor. It’s going to be a unique situation. From film, it appears that they play in a baseball outfield,” Purvis said. “It’s going to be a different look, a different feel, a different environment all the way around. We just have to know that going in and prepare for that mentally, and hopefully not let that throw us off.”

From a tactical standpoint, Purvis said playing on a smaller field will mostly serve to condense the action. Unlike the wide open spaces that characterize the 8-man game in Mississippi, the narrower field limits plays toward the edges. Fortunately, Purvis added, PCA mostly prefers to run between the tackles.

“Most of it is offensively, making adjustments to our spread formations. We’re going to have to condense them down. There won’t be as much space outside to do things. It might affect the passing game a little bit,” Purvis said. “I don’t see it affecting us offensively as much because we’re not a big outside run team. We run the ball vertical and try to get (running back Tyler Washington) downhill.”

Handling the mental aspect of the entire experience Friday will be key, Purvis said. PCA has only won one of its four road games this season, and in the three losses it has been outscored 122-34 in the first half.

Christian Collegiate (4-3) appears talented enough to make the Eagles pay if they get off to another slow start.

“They’ve got some big, physical linemen, several skilled playmakers, the quarterback is tough to tackle, and that’s something we’ve struggled with in some games,” Purvis said. “They’re going to be a hard team to defend, for sure. If we’re mentally not there at the beginning of the game it could go the other way quick.”
While the field is small, this game is huge for Porter’s Chapel.

The Eagles (5-3) can clinch the program’s first winning season since 2008, and stay on track to host a first-round game in the MAIS Class 2A playoffs. There’s also a chance they could earn a first-round bye if they win their last two games and some other results break in their favor.

PCA has not reached the postseason since 2014. The regular season ends next week with a home game against Tallulah Academy, and the playoffs start on Oct. 29.

PCA has finished with a .500 record three times in the past 13 years, but never with more wins than losses.

“It would be good. You get over the hump. We’ve gotten to five and struggled to get over that hump,” Purvis said. “Finally breaking through with still one to go in the regular season, and being able to put that behind us prior to Week 10 and the playoffs, I think there’s a lot of satisfaction in just going down there and taking care of business this week.” 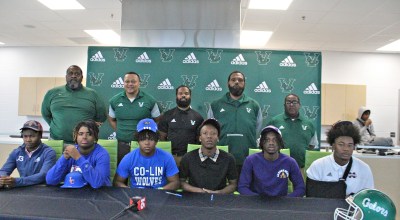