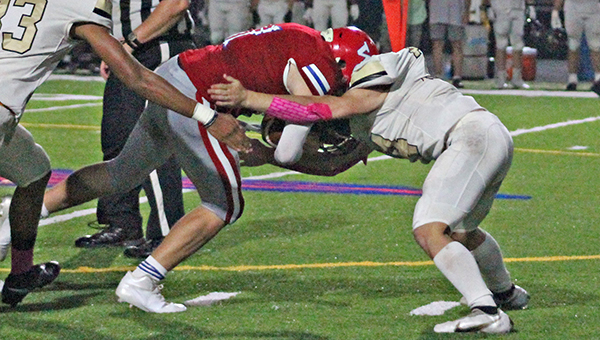 Warren Central quarterback Jack Wright takes on a Northwest Rankin defender at the end of a run. Wright and the Vikings play Pearl Friday at 7 p.m., at Viking Stadium. (Ernest Bowker/The Vicksburg Post)

It’s been a long time since Warren Central has been in this situation.

The Vikings are 0-3 in region play for the first time in 11 years. The strong defense that has been the program’s identity for generations has been shredded. Their nine-year streak of playoff appearances is hanging by a thread.

One of the most consistent programs in MHSAA Class 6A has been bafflingly inconsistent for the better part of a month, and its season could spiral into a string of playing-for-pride games if it doesn’t find a solution soon.

“It says a lot about our program. We have not been in this situation very often. But tough times come to us all, and we’re in the middle of a tough stretch. No doubt about it,” Warren Central coach Josh Morgan said. “You find out what you’re made of in these tough times. If we can hang together and enjoy our journey together, and get it right and fix it, it’s an opportunity to learn a lot. But we’re definitely not used to this. I’m going to be anxious to see if we can come out of it and finish our year successfully.”

Pearl is one of three undefeated teams in Region 3-6A, and Warren Central is among three winless teams at the bottom. For Warren Central to have any chance at reaching the postseason it’ll need to win its last four games, starting with the Pirates.

“It’ll be another tall task for us. It’ll be a winnable ballgame. Our challenge will be to have a good week and prepare ourselves well,” Morgan said. “A win will cure a lot of things.”

Warren Central has a lot of things that need curing. The defense allowed 30 points total in its first three games — all victories — but has given up 38, 38 and 30 in its three region losses.

Northwest Rankin converted 11 of its first 13 third down situations in its 30-20 victory over the Vikings last week, while having six plays of 18 yards or more. Warren Central lost two fumbles that led to Cougar touchdowns, and dropped two interceptions.

The week before that, Brandon went 11-for-16 on third and fourth downs combined in beating the Vikings 38-20. Warren Central had a chance to get off the field on one early touchdown drive but couldn’t recover a fumble that was loose in the open field.

“I think our guys are pressing a little too much. They’re trying very hard and sometimes the harder you try, you miss plays because you’re trying so hard,” Morgan said. “We need to do a better job of preparing, have a really good week, take a deep breath and really stick to who we are and what we are, and be good at what we’re doing. Just try to be the best us that we can be.”

There have been some positives for the Vikings. The offense has been fairly consistent, and running back T.J. Thompson has had 94 rushing yards or more in four of the last five games. He had exactly 100 yards, as well as one touchdown on the ground and another receiving, against Northwest Rankin. They’ve also outscored opponents 19-10 in the second half the last two weeks.

Terry and Petal — the other two winless teams in Region 3-6A — follow Pearl on the schedule, so a win this week could conceivably be the spark they need to stay in the playoff hunt until the very end.

“We just need something good to happen,” Morgan said. “Confidence is very important in high school. The margin for error is so slim, especially in our district and the competition we’re playing. We still don’t feel like we’re far off from being a quality football team, but we’ve got to start making those plays that are swinging games.

“That’s where we’ve struggled here of late,” he continued. “The big plays are not going in our favor and are momentum swingers. Our job as coaches is to keep everybody together and gear in the same direction, and also put them in the best position we can be to be successful and get our confidence back going.”