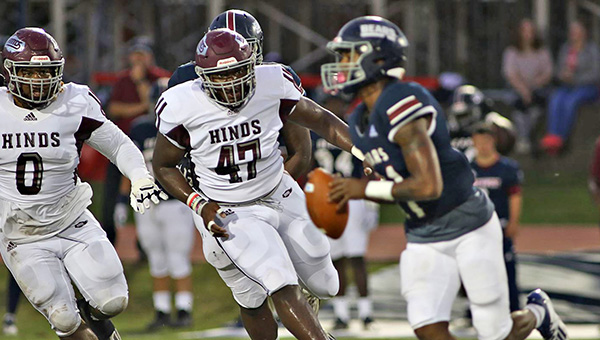 After six weeks of close games and tough losses, Hinds Community College’s football team finally got an easy one.

Jeffrey Pittman had 178 total yards and four touchdowns, BeSean McCray threw two touchdown passes, and Hinds crushed Southwest Mississippi 50-3 on Thursday night for its most lopsided win of the season.

Hinds (5-2, 3-1 MACCC South) had had three wins by nine points or less, and didn’t pull away until the second half in another. It led this one 36-3 at halftime as Pittman scored three rushing touchdowns and caught a 28-yard TD pass from McCray in the first half.

Pittman finished the game with 130 rushing yards and 48 receiving yards. His rushing touchdowns covered 80, 2 and 2 yards.

“I thought we played a lot better because we scored early, which takes the pressure off,” Hinds offensive coordinator Kelly Murphy said. “We still need to make sure we slam the door early when we get a lead in future games.”

Jaquerrious Williams rushed for 105 yards and two touchdowns, including an 8-yarder with 9:46 left in the third quarter. Gulf Coast went three-and-out on its next possession, and D.T. Sheffield returned the punt 47 yards for a touchdown to give Northwest an 31-14 lead.

Jamarien Bracey added a 14-yard TD run with 8:14 left in the fourth quarter to pad the lead. He carried the ball 15 times for 71 yards and the one TD.

Jones 28, Pearl River 22
Quaterius Hawkins threw for one touchdown and ran for another, and Jones College (7-0, 4-0 MACCC South) defended its No. 1 national ranking by holding off a second-half surge from Pearl River (2-5, 0-4).

La’Damian Webb ran for 170 yards and two touchdowns for Jones, which led 28-10 after Hawkins’ 79-yard touchdown run on the first play from scrimmage in the second half. Pearl River cut it to 28-22, however, with touchdown runs by Will Young and Tony Brown in a 24-second span in the third quarter. A fumbled kickoff by Jones led to the second score.

Pearl River only had two first downs in the last 27 minutes of the game, however. It missed a field goal early in the fourth quarter, and Young was intercepted by Hershey McLaurin with 2:12 left to seal it.

Hargrave and Rogers also hooked up for a 5-yard TD pass with 31 seconds left in regulation. The Wolves then tied it at 14 on a two-point conversion pass from Hargrave to Tyquan Henderson.

After Jaren Van Winkle put East Central ahead with a 43-yard field goal in overtime, Co-Lin drove in for the winning score.

Hargrave finished 18-of-32 passing for 193 yards, with two touchdown and one interception. Henderson caught six passes for 101 yards, and Rogers had five receptions for 64 yards and two TDs.

Hunter Jones was 11-of-14 passing for 162 yards for Itawamba, including a 49-yard touchdown to Jamal Brooks. R.J. Wilson had 35 yards and one touchdown on only four carries.

Thomas McCauley had 97 rushing yards for Holmes, and Javontae Matthew scored the Bulldogs’ lone touchdown on a 5-yard run early in the fourth quarter. Holmes allowed less than 40 points for the first time this season.

East Mississippi scored touchdowns on six of its seven possessions in the first half as Jones completed 10 of 13 passes for 161 yards and all four of his touchdowns.