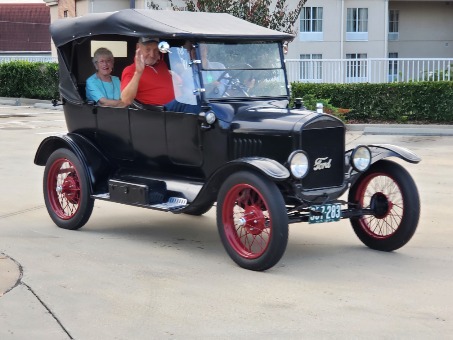 Thursday evening, the parking lot at the Comfort Inn on Berryman Road was transformed into a museum of automotive history as members of a Model T touring group stopped in Vicksburg for an overnight stay, filling the parking lot with some of the 100-year-old cars.

The Model T Ford was built from 1908 to 1927 and was known for its low price and simplicity. It also acquired nicknames like “Tin Lizzie” and “flivver.”

The cars were painted black and the classic image of the Model T is the black, two-door convertible. But the cars parked at the Comfort Inn Thursday featured a mix of two- and four-door cars, one pickup and a Model T painted red and blue with gold accents. Some Model A Fords, which were built from 1927-1931, were scattered on the parking lot.

“This is the Colorado High Peaks Model T Club,” said Missouri resident and member Jerry Fish as he sat on the front bumper of one of the flivvers. “We meet once a year for roughly a two-week drive.”

“The group here is literally from all over the United States,” said Bill Carlburg, a dairy farmer from the area around Peoria, Ill. “We love old cars. There are people here who are mechanics, engineers, doctors; we’ve got ’em all.”

He pointed to another member.

“This man here from Alabama set up the drive and we’re running the (Natchez) Trace and some other little places off of the Trace,” he said. “We started out up at Tupelo and we’ve been down to Natchez and we spent the night over on the other side of the (Mississippi) River and we spent the day in Vicksburg. We’ll go to Jackson and spend the night there tomorrow night after we spend a little more time in Vicksburg.”

The group will return to Tupelo, go to Nashville, Tenn., and then to Alabama.

“We just want to enjoy the countryside,” Fish said. “What you do on these things (trips) in old cars — at least we do — is you drive in somebody’s backyard and see what the real people live like. We stay off the Interstate.”

“If you drive on the Interstate, you can’t see the countryside,” Carlburg said. “These are road cars. Not show cars.”

“We’re just people who like to get out and have a good time,” Fish said.