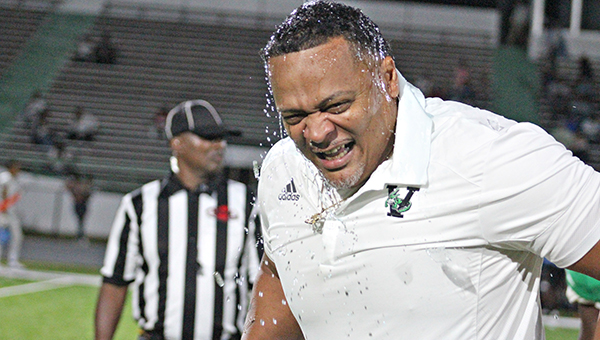 Vicksburg High football coach Todd McDaniel drips from the water his players doused him with following a 36-14 victory over Ridgeland on Friday. The Gators clinched a winning season and a home playoff game with the win. (Ernest Bowker/The Vicksburg Post)

As he ran toward midfield for a postgame handshake, Vicksburg High coach Todd McDaniel was doused with a cooler full of water by his players. A few moments later a rain shower drenched Memorial Stadium, appropriately giving the rest of the Gators the same celebration on a much bigger scale.

Otis James ran for 109 yards and one touchdown, Johnny Smith scored twice, and the Gators routed Ridgeland 36-14 on Friday night for their sixth win in a row — and one of the biggest regular-season victories in more than a decade.

Vicksburg (6-2, 6-0 Region 2-5A) ensured it will finish no worse than second in Region 2-5A and play a home playoff game for the first time since 2008. It’ll face Neshoba Central next week with a chance to clinch its first region championship since 1990.

“Me and my wife came over here two seasons ago, and they played Ridgeland for homecoming. They beat us 60-something to 6. What a change,” McDaniel said. “I’m just happy that the fans supported us, the administration, my kids worked hard every single day. And this is not over. We’re not at our best yet. We’ve not reached our peak.”

The Gators knocked Ridgeland’s starting quarterback Thomas Dyess out of the game on the first series, then sacked his backup James Woody three times. Jaleel Fleming also intercepted Woody twice in the fourth quarter to end any slim chances the Titans had of rallying late.

Ridgeland had 198 yards of total offense, with a big chunk of it coming on a 49-yard TD pass from Woody to Ayden Williams in the fourth quarter.

Vicksburg’s offense, meanwhile, was ruthlessly efficient. Smith scored on a 3-yard run to cap a short touchdown drive on the team’s first possession, and its second ended with James punching it in from 4 yards out early in the second quarter.

Malik Montgomery had a 4-yard TD run with 1:13 left in the half, and Collin Johnson’s two-point conversion run put the Gators ahead 22-0 at halftime.

Vicksburg scored all three times it had the ball in the first half and piled up 178 rushing yards. It finished the game with 261 rushing yards, spread among six players. James, Montgomery, Smith, and quarterback Ronnie Alexander each scored a touchdown.

“I could look in the kids’ eyes and tell it was a different focus. It was a different level of intensity because they knew we had to have this game. They want a winning season. They want to host a playoff game. It’s time for us to be great,” McDaniel said.

Ridgeland never got closer than two touchdowns in the second half, and both times it did the Gators answered.

A 2-yard TD run by Ka’Mari Payne was followed by a nine-play scoring drive by Vicksburg that chewed more than five minutes off the clock. Alexander scored on a 1-yard sneak on the first play of the fourth quarter, then threw a two-point pass to Tyler Henderson to make it 30-8.

After Williams’ long touchdown reception, Fleming picked off Woody and returned it to the 15-yard line. Smith scored on an 8-yard run two plays later for a 36-14 lead with 5:15 remaining, and the rest was academic.

“It feels good,” Washington said. “I feel like we’re on the way to doing something big. I can’t describe it.”