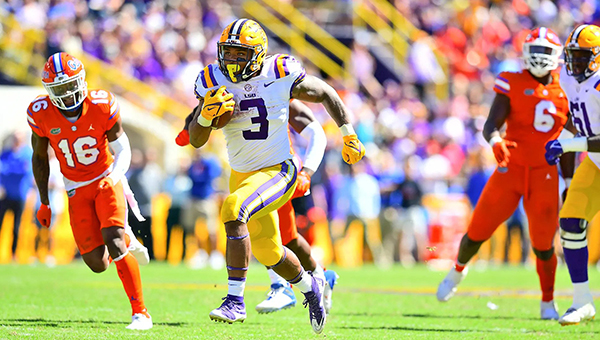 BATON ROUGE, La. (AP) — LSU running back Tyrion Davis-Price and the Tigers’ offensive line apparently have figured something out.

That could improve LSU’s prospects for the balance of what has been a turbulent season.

Davis-Price rushed for an LSU-record 287 yards and three touchdowns, and the Tigers’ banged-up defense came up with four interceptions in a 49-42 victory over No. 20 Florida on Saturday.

First-year offensive coordinator Jake Peetz “challenged us the last few weeks to go in and create a running game,” Davis-Price said, alluding to earlier struggles that had LSU ranked 127th nationally in rushing entering this weekend. “The offensive line has been busting their tails with extra work and I couldn’t be more proud of them. I love doing work for them.

“There were big holes for me to run through; they deserve all the credit in the world,” he added.

The stirring performance produced thunderous roars from a less-than-capacity Death Valley crowd that came in with low expectations after unranked LSU (4-3, 2-2 Southeastern Conference) had dropped its previous two games against Auburn and Kentucky, fueling speculation that coach Ed Orgeron’s hold on his job was tenuous at best.

“I’m not going to blink until the day I die; but our team didn’t blink today,” Orgeron said. “Our backs are against the wall, but we took a big step.”

After Damone Clark’s interception of Florida quarterback Anthony Richardson, Davis-Price literally and fittingly ran out the final 1:59 on Florida (4-3, 2-3). He ran for two more first downs and broke the previous LSU single-game rushing record of 285 yards held by Derrius Guice.

Max Johnson passed for 133 yards and three touchdowns — all to Jaray Jenkins. The last one came on fourth-and-goal with 3:30 left.

The highlight-filled game, replete with big plays, wild momentum swings and even a successful Hail Mary pass by Florida at the end of the first half, was the latest chapter in a rivalry that has produced high drama and unpredictable outcomes. Seven of the last eight meetings have been decided by eight points or less

“The one stat to me stands out a lot is we’re minus-4 turnover ratio,” Florida coach Dan Mullen said. “We didn’t stop the run and make the stops we needed to in the second half when we started to gain momentum. Every time we’d get that kind of fix to get ourselves out of the hole we kind of couldn’t get the stop to get over the hump.”

Emory Jones threw two interceptions, including one returned by Dwight McGlothern 37 yards for a touchdown on the Gators’ first series of the second half. Earlier, Jones’ deflected pass was intercepted by linebacker Micah Baskerville and returned 54 yards to the Florida 28, setting up Johnson’s first scoring pass to Jenkins.

Richardson was intercepted by Ward on the first play of Florida’s next series, leading to Johnson’s 5-yard TD pass to Jenkins to make it 21-6.

“I told the defense we have to play together,” Clark said. “It’s now or never.”

Florida appeared to be regaining momentum on the final play of the first half, when Jones heaved a Hail Mary pass from 42 yards out that was caught by Justin Shorter between three Tigers defensive backs to cut LSU’s lead to 21-13.

But McGlothern provided a measure of redemption with his pick-six on the opening series of the third quarter. That was the first of four TDs scored in a span of 6:13, including Richardson’s 5-yard run, followed by his run for a two-point conversion, Davis-Price’s 40-yard run and Richardson’s 5-yard pass to Shorter.

Florida tied it at 35 on Richardson’s 11-yard pass to Dameon Pierce with 3:45 left in the third.

After Davis-Price’s 25-yard scoring run and Richardson’s 33-yard scoring pass to Jacob Copeland, it was tied at 42.