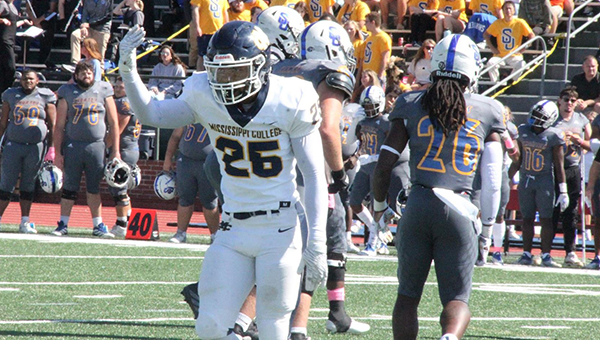 Felix Harper accounted for a touchdown through the air and another on the ground, and Niko Duffey ran for 138 yards and a late score to guide Alcorn State to a 24-12 victory over Mississippi Valley State on Saturday.

Harper was only 15-of-25 passing for 145 yards, and was sacked three times. He added 53 rushing yards, however, and led two early scoring drives that put Alcorn (4-2, 3-0 Southwestern Athletic Conference) in control.

Alcorn never trailed, and its defense kept Valley (2-4, 1-2) from winning a third consecutive game for the first time since 2012. All of Valley’s points came from field goals by Orlando Fernandez, from 41, 40, 50 and 35 yards. Caleb Johnson had 123 rushing yards, but the Delta Devils only had 212 yards of total offense.

Alcorn won its third game in a row as it started a four-game conference road swing. The Braves will play at Texas Southern next Saturday.

The Tigers, who have not allowed more than 17 points in any game this season, held Alabama State to 157 yards and eight first downs. Keonte Hampton had nine tackles, seven solo.

Sanders, the son of Jackson State coach Deion Sanders, completed 17 of 29 passes for 201 yards, and the Tigers added 149 yards on the ground.

Myles Crawley was 9-of-26 passing for 117 yards for Alabama State. He threw 17 yards to Jeremiah Hixon for a touchdown that tied the score at 7 in the second quarter.

Jackson State controlled the second half as Sanders had a short TD pass to Malachu Wideman, Marshall scored on a 4-yard run and JD Martin capped the scoring with a 21-yard run in the fourth quarter.

Keith Corbin III caught seven passes for 113 yards and a touchdown for the Tigers.

North Greenville 42, Delta State 34, 2OT
Semaj Lakin scored the go-ahead touchdown on a 1-yard run in the second overtime, and North Greenville got a defensive stop on Delta State’s possesion to hand the Statesmen yet another wild loss.

Delta State (2-5, 0-4 Gulf South Conference) lost its fifth game in a row, with four of those decided by seven points or less. In three of the five losses, DSU’s opponent has scored the winning points with less than five minutes left in the fourth quarter or in overtime.

Delta State led 24-13 entering the fourth quarter Saturday, but North Greenville (4-3, 1-2) took the lead on pair of touchdown passes from Bryce Fields to Matthew Martin covering 91 and 71 yards. Delta State tied it at 27 with Connor Mantelli’s 42-yard field goal with 2:59 left in the fourth quarter, and the game went to overtime.

The teams traded scores in the first overtime period, and then Lakin punched in a 1-yard run to put North Greenville ahead 42-34 following the two-point conversion. Delta State’s possession included a run for no game, two incompletions, and a game-ending sack on fourth down.

Fields was 7-of-14 passing for205 yards and three touchdowns for North Greenville. Lakin had 41 rushing yards and two touchdowns. Martin had three receptions for 168 yards and the two long touchdowns.

Delta State quarterback Cole Kirk was 32-of-53 for 282 yards and one TD. Deion Dampier carried the ball 20 times for 159 yards and one touchdown, and Rico Owens had 20 carries for 91 yards and two TDs.

Williams only touched the football four times. His only reception was a 61-yard touchdown from Smith-Moore in the second quarter, and one of his three carries resulted in a 5-yard touchdown early in the third. He had 12 rushing yards.

Cole Fagan added a 26-yard TD run with 6:20 left in the third quarter to give the Choctaws their 20-7 lead.

The Blazers have scored more than 40 points in every game during their winning streak. They had 332 rushing yards on Saturday, with D’Ante Gallashaw and quarterback Mayowa Asagunla also going for more than 50 yards apiece. Asagunla had 50 yards and two touchdowns, and only threw for 57 yards on 9-of-13 passing.

Hutchinson also caught four passes for 60 yards and a touchdown for Trinity.

Trinity had 282 rushing yards and 563 yards of total offense, while holding Millsaps to 72 total yards and eight first downs. The Tigers registered four sacks, intercepted two passes, and recorded a safety on a blocked punt.