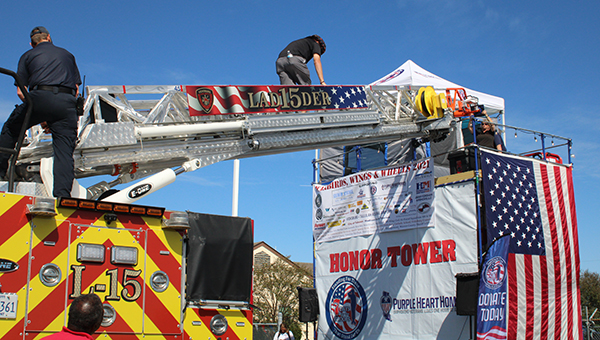 Disabled veteran Scott Burns makes his way along an extension ladder from Vicksburg fire truck Ladder 15 as he heads to the Honor Tower at the Vicksburg-Tallulah Regional Airport in Mound, La., for a fundraiser. Burns is staying in the tower to call attention to disabled vets and raise money for the Purple Heart Homes, which helps disabled veterans. (John Surratt/The Vicksburg Post)

MOUND. La. — Sunday afternoon, as about 100 people looked on, Scott Burns kissed his wife Emily, hugged sons Jace and Hudson, ascended the Vicksburg Fire Department’s Ladder 15 and crossed a bridge formed by its ladder to the elevated tent that will be his home at the Vicksburg-Tallulah Regional Airport for the next seven days.

The event was the kickoff for a seven-day program sponsored by the Southern Heritage Air Foundation honoring veterans and leading up to the Warbirds, Wings & Wheels program next weekend.

Burns, a disabled Marine Corps veteran, is occupying the “Honor Tower” at the airport for the next seven days — a total of 168 hours without coming down — to call attention to disabled veterans and raise money for Purple Heart Homes. The non-profit organization provides housing for service-related disabled and elderly veterans.

Burns said his passion is to help veterans and he hopes to raise between $30,000 and $40,000 during his stay in the tower. The money will go to help veterans in the Vicksburg-Tallulah area.

“This is a pretty good kickoff,” Mekus said. “We have a beautiful day, beautiful weather, and I think the rest of the week will be the same.”

Burns was injured in training accident while stationed in North Carolina, and was medically discharged. He eventually had to have his leg amputated.

Burns’ wife Emily said her husband has been doing events like the Honor Tower for more than 20 years.

Burns, she said, initially stayed in the tower for three days until someone challenged him to do seven. The tower has a portable toilet and a shower for Burns to use.

“They said something about him being a Marine and why he couldn’t do seven days, so he said why not and began doing seven days,” Emily Burns said. “This is his way to give back. He goes in the tower and he’ll stay there 24/7. He will not touch the ground for seven days.

“I’m proud of him and he’s very inspiring to see,” Emily added. And while part of her wants him home, she said, she knows there are a lot of service members who are in the same situation, “So I can give that week away easily.”

Events for Warbirds, Wings & Wheels begin Wednesday with a Warbird Formation Clinic sponsored by the foundation, where pilots work to get their Federal Aviation Administration certification to fly in formation. The clinic will continue through the air show on Saturday, Oct. 23.

A twilight air show will take place Friday with live music from the band “Recall” and up to four air acts performing.