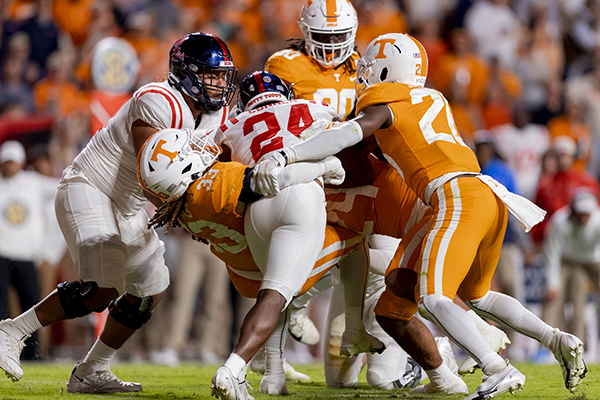 KNOXVILLE, Tenn. (AP) — No. 13 Ole Miss held off Tennessee 31-26 on Saturday night after Rebels coach Lane Kiffin avoided being by hit by golf balls as Volunteers fans pelted the field with objects in the chaotic final minutes.

Ole Miss stopped Tennessee a yard shy of a first down on a fourth-and-24 pass with just over a minute left. After that play, and the review that confirmed the spot of the ball, Tennessee fans pelted the field with objects. Tennessee’s cheerleaders, dance team and band were ordered out of the stadium and police cleared the student section.

“I don’t know if I’m more excited that we found a way to win or that I didn’t get hit with the golf balls that they were throwing at me,” former Vols coach Kiffin told SEC Network, holding up a yellow golf ball.

“I still have my souvenir golf ball,” Kiffin said. “I also got hit with bottles with some brown stuff in them. I don’t think those fans would waste moonshine. You’ve got one of the most passionate fan bases in America. A call didn’t go their way.”

Play resumed after about a 20-minute delay.

“I’m disappointed in the way the game ended with things being thrown from the crowd,” Tennessee coach Josh Heupel said. “I know that’s very few of our crowd members. For the most part of the game, what an unbelievable atmosphere to see Vol Nation show out the way they did.”

“The Conference has established expectations for behavior and sportsmanship, and the actions of fans at Saturday night’s game were unacceptable under any circumstances. We are accustomed to intense competition every week, but under no circumstances is it acceptable to endanger the contest participants and disrupt a game. We will review existing Conference policies and the Commissioner’s authority to impose penalties and communicate with the leadership at the University of Tennessee — and all of the SEC’s member universities — to make certain this situation is not repeated.”

“I am astonished and sickened by the behavior of some Vol fans at the end of tonight’s game. Good sportsmanship must be part of who we are as Volunteers. Behavior that puts student-athletes, coaches, visitors and other fans at risk is not something we will tolerate.”

After play resumed, Tennessee’s Velus Jones returned a punt 40 yards to the Ole Miss 47. Hooker ran 14 yards, but was injured with 18 seconds to play. Joe Milton came off the bench to hit Walker Merrill for 12 yards to the 21. Milton spiked the ball, then misfired into the end zone, setting up the final play. Milton ran 13 yards on the final play and was pushed out of bounds at the 8 as time expired.

“I wish (Tennessee) had better class,” Ole Miss linebacker Mark Robinson said. “We just came here to win a game and we did.”